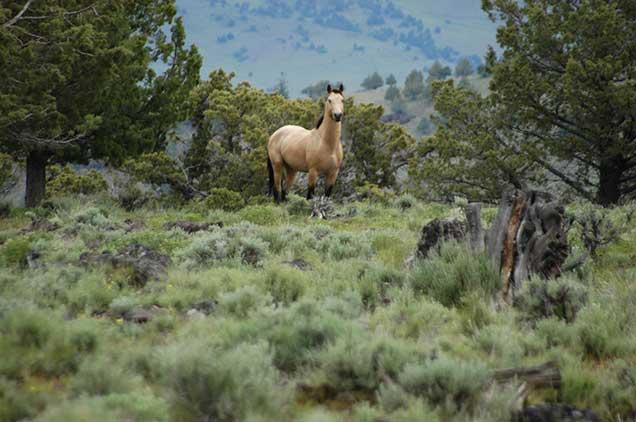 The lineage of the Murderer's Creek horses is diverse and quite debatable. Although it is likely that horses found in the area by early explorers (probably escaped from Indian herds) left their mark in the area, there can be no dispute that many of the Murderer's Creek horses are descendants of animals lost or turned loose by settlers and ranchers. Dr. Gus Cothran performed genetic analysis of this herd in 2000-2001. He found that this herd -- which is physically isolated from other herd areas -- is the most unique, bearing the least similarity to the other Oregon herds studied. He found that this herd bears closest genetic resemblance to the American light racing and saddle breeds as well as to the New World Iberian breeds.

Most areas of the Murderer's Creek Territory are accessible by road during the summer months. Visitors may get a glimpse of horses retreating into the trees. Stud piles along any road are an indicator that you are close to horses. It has been said that these horses are more like elk than horses. Despite this reputation, the "timber horses" tend to settle down shortly after capture, and they are generally quieter when worked with than their open country cousins of the west end of the territory.

The horses range anywhere from 13.3 to 15.1 hands in size. In terms of color, they tend to be black, bay or brown. Horses in the western part of the territory tend to be gray, dun or sorrel.

Location: The Murderer's Creek Wild Horse Territory was established in 1972. It is located southwest of John Day, Oregon in the Malheur National Forest.

Size: It includes 73,615 acres of Forest Service and 34,954 acres of Bureau of Land Management lands which is managed by the Malheur National Forest, John Day, Oregon.

Topography/Vegetation: The "timber horses" of the Murderer's Creek Territory inhabit mountainous terrain. These horses tend to stay at the high elevations year-round, living in bands of three to eight animals. Despite snow depths of 2 to 4 feet in these areas, the horses have adapted using timber thickets for shelter, staying near springs and utilizing the south slopes of ridges which tend to melt off earliest in the spring to provide forage. More than 50 percent of the horses of the Murderer's Creek are "timber horses." They live in heavily timbered areas of ponderosa pine and mixed conifer. Most of the horses gathered in 2008 came from the forested area of the Territory. Elevation ranges from 4,500 to 6,500 feet.

Wildlife: The horses of Murderer's Creek HMA coexist with mule deer, elk, antelope, bighorn sheep, bear, cougar, and myriad smaller forest animals. Horses have been observed at salt licks with deer and grazing in the company of elk. One mare was seen on numerous occasions running with a herd of elk. 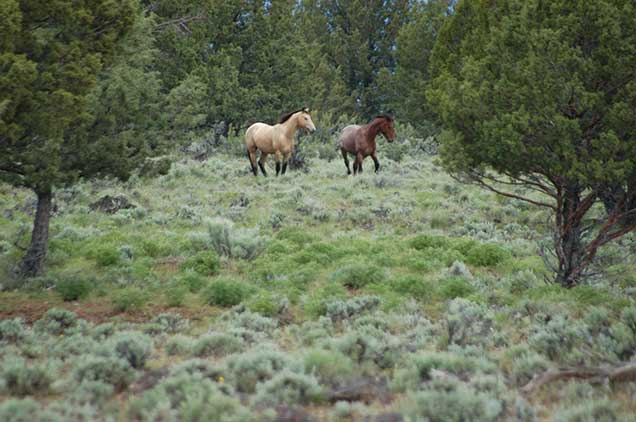