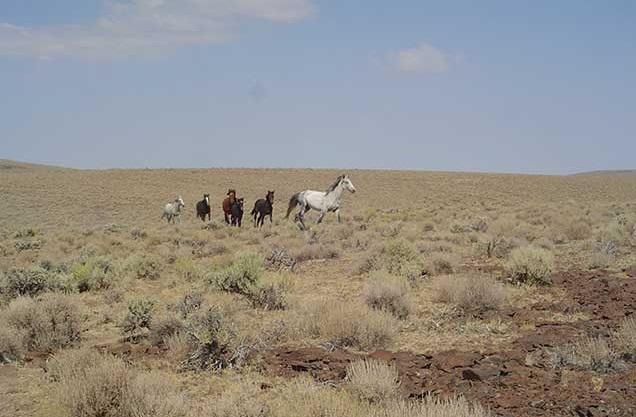 Many of the horses are descendants of thoroughbreds from U.S. Army remount stallions while others are descendants of escaped or released horses from local ranches. In the early 1970’s, wild horses within the Sheepshead portion of the HMA were very varied in color while the Heath Creek portion of the HMA was dominated by dun, bay, black, brown, sorrel, and an occasional paint.  Adult horses in the HMA weigh an average of 950 to 1150 pounds and stand between 14.3 and 15.3 hands, with some stallions being slightly larger.  The horses exhibit saddle stock conformation with quarter horse and thoroughbred influence. Genetic analysis has identified genetic similarity to North American Gaited breeds, Light Racing and Riding breeds, and Old World Iberian breeds. The genetic analysis results indicate a herd with mixed origins with no clear indication of primary breed type.

Location: The HMA is located immediately northwest of Burns Junction, Oregon bordered on the east by highway 78 and on the west by the Steens Mountain Rim.  The southern border of the HMA adjoins the Coyote Lake/Alvord-Tule Spring HMA.  This HMA is a result of a land use plan decision to combine Burn's Heath Creek/Sheepshead HMA with Vale's Sheepshead HMA due to the migratory movement between them.  This HMA is now managed out of Vale as part of the Barren Valley Complex along with Coyote Lake/Alvord-Tule Springs and Sand Springs HMAs.

Topography/Vegetation: Elevation in the HMA varies from 3900 to 6300 feet. West and east portions of the HMA are flat to gently rolling hills while the middle of the HMA is very mountainous with steep ridges and canyons. Most of the HMA are dominated by big sagebrush, low sagebrush, blue-bunch wheatgrass, Thurber's needlegrass, and Idaho fescue.  The flats are covered by salt desert vegetation, playas, or dunes. Salt desert vegetation includes low sagebrush, greasewood, shad scale, winterfat, bottlebrush squirreltail, Indian ricegrass, and Sandberg bluegrass. Weedy species such as cheatgrass and medusa head rye are invading portions of the HMA. Precipitation averages 7-9 inches, coming mostly during the winter and spring months. The western part of the HMA lies in the rain shadow of the Steens Mountain so doesn't receive as much precipitation. Sheepshead Mountain is the large landmark on the norther end of the HMA with long ridges extending from it that receive snow and scattered summer thunderstorms. Most of the water sources in this HMA are springs and reservoirs. During drought years, wild horses from the Heath Creek portion of the HMA and from Coyote Lake/Alvord-Tule Springs and Sand Springs HMA move into the Sheepshead Mountain region as it has the only perennial water sources. 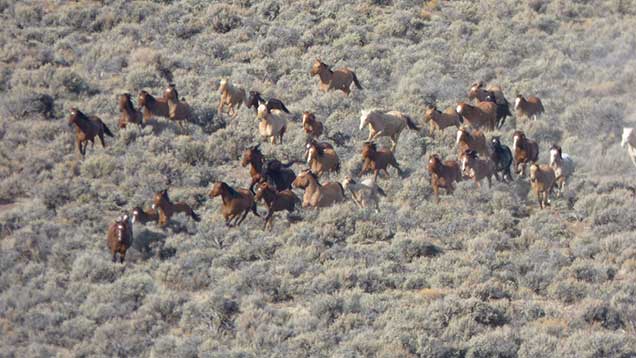