Many of the horses are descendants of thoroughbreds from U.S. Army remount stallions while others are descendants of escaped or released horses from local ranches. Characteristics of the original herd were colors dominated by bay, sorrel, and black. Local ranch escapees have add colors like dun, buckskin, and pinto. Average size is anywhere from 14.2 to 15.2 hands, with weights between 950 to 1,050 pounds.  Genetic analysis has identified genetic similarity to Light Racing and Riding Breeds with mixed origins followed up by North American Gaited Breeds. The genetic analysis results indicate a herd with mixed origins with no clear indication of primary breed type.

Location: The HMA is located approximately 8 miles west of Harper, Oregon. It is bordered on the south end by the Malheur River.  The western boundary is comprised mostly of Hog Creek Ridge and the cliffs that drop off into the Hog Creek drainage.

Topography/Vegetation: Elevation in the HMA varies from 3900 to 6100 feet.  Much of the area is flat to gently rolling hills with very little distinct topographical changes. The far southern and norther portions contain several steep buttes with rims and rocky outcrops. Parts of the HMA are dominated by big sagebrush, low sagebrush, blue-bunch wheatgrass, Thurber's needlegrass, and Idaho fescue.  Most of the flats are covered by salt desert vegetation, playas, or dunes. Salt desert vegetation includes low sagebrush, greasewood, shadscale, winterfat, bottlebrush squirreltail, Indian ricegrass, and Sandberg bluegrass. There are a few scattered crested wheatgrass seedlings on the Burns portion of the HMA. Weedy species such as cheatgrass and medusa head rye are dominant in portions of the HMA. Precipitation averages 7-9 inches, coming mostly during the winter and spring months. The area is free of snow during most of the winter as it lies in the rain shadow of the Steens Mountain. There aren't any perennial streams in this HMA so a few springs and wells are the main water sources. 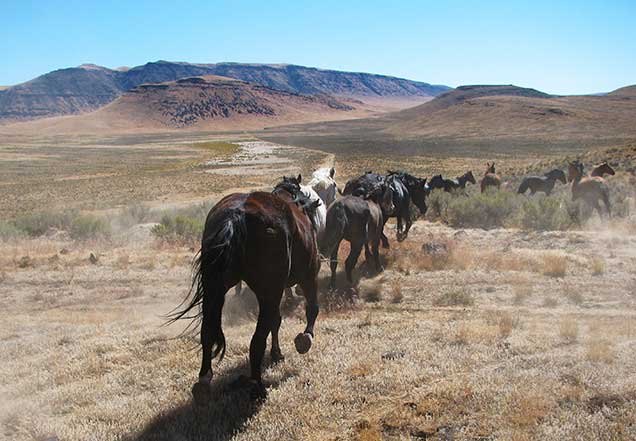