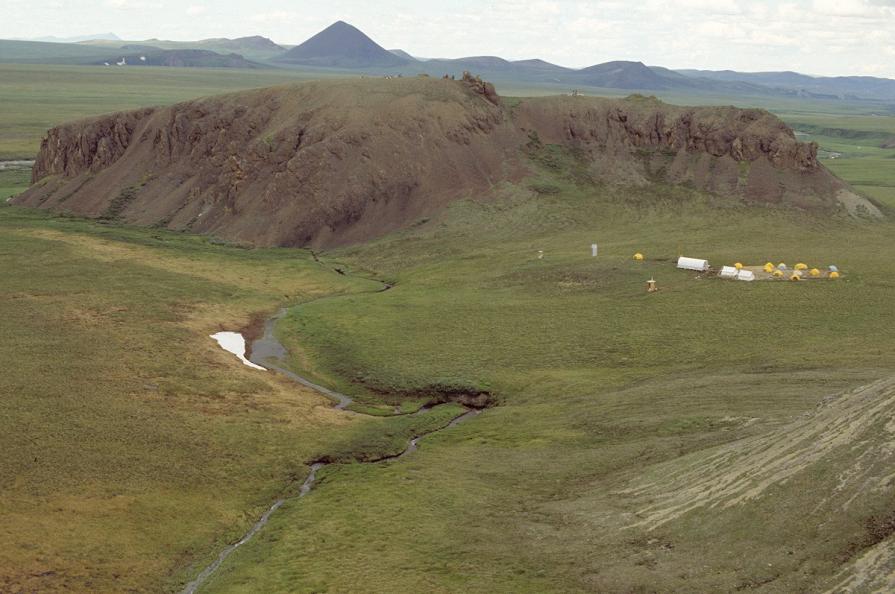 When did the first people come to the Western Hemisphere? And who were they? BLM scientists in northern Alaska are at the cutting edge of new theories about the first Americans. The emerging picture from their research heightens the complexity surrounding one of the most enduring anthropological questions of our time.

For much of the 20th century, scientists have scoured remote parts of Alaska for clues to North America's first inhabitants — paleoindians. In 1978, when BLM archaeologists were surveying public lands north of the Arctic Circle prior to oil exploration, they discovered several stone projectile points that had probably been mounted on lance-like spears. Initial radiocarbon dating indicated the points were around 7,600 years old, not even close to the oldest artifacts found in the New World. But by the late 1980s a more precise dating method had been perfected —accelerator mass spectrometry. This showed that some of the artifacts from the Mesa site, as it was called, were in fact nearly 12,000 years old. The finding stunned archaeologists, and the Department of Interior subsequently funded a five-year research project that concluded in 1997.

Lying atop a mesa-like rock outcrop, the location of the site is nothing less than breathtaking. From 200 feet up, ancient hunters had a 360-degree vantage point for spotting game such as bison and, possibly, mammoths.

Until the site was discovered, archaeologists generally accounted for the early cultures in the lower 48 as the products of a single migration out of Asia. But the distinctiveness of the stone points found here — and at the Putu site 160 miles to the east — indicate that perhaps there were several migrations (Mesa artifacts range in date from 9,700 to 11,700 years old). Early Alaska may have been occupied by different cultures who spoke different languages, and had distinct ways of making tools.

The Mesa and Putu artifacts have amazed archaeologists with their close resemblance to paleoindian tools found to the south. As a rule, little of what is found from early Alaska resembles anything from paleo sites in the lower 48. This means that the descendants of the Mesa culture might have gone on to establish themselves farther down the continent.

What happened in Alaska over 11,000 years ago may teach us lessons about how people adapted — or did not — to the rapidly changing climate as the Ice Age ended. This could give us more perspective on our place in nature and our adaptiveness as a species. We may also find some of the most elusive truths about human history.