The Mesa Site: Paleoindians above the Arctic Circle 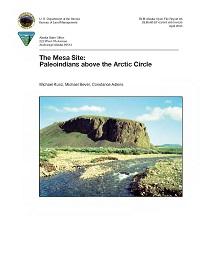 Between 1978 and 1999, excavations in arctic and western Alaska have revealed the presence of Paleoindians during terminal Pleistocene/early Holocene times, ca. 12,000 to 9500 years BP (Before Present). The Type Site for this cultural manifestation, the Mesa Site, is located on the northern flank of the central Brooks Range at N68° 24.72 W155° 48.02, amid rolling foothills that extend northward 40 miles to the Colville River. The site lies atop a mesa-like ridge that rises 180 feet above the floor of the Iteriak Creek valley, offering an unobstructed 360° view of the surrounding treeless countryside. Excavation at the site has produced the remains of more than 450 formal flaked stone tools and over 120,000 pieces of lithic debitage, which comprise an assemblage typical of the “classic” Paleoindian cultures of the North American High Plains. More than 150 of the artifacts are the complete or fragmentary remains of lanceolate projectile points, many of which have been recovered from within the charcoal/soil matrix of discrete hearths which are the central features of numerous activity areas. The age of the occupation is constrained by 44 uncalibrated AMS radiocarbon dates covering the interval 11,700 to 9700 years BP. The site lacks evidence of any widespread postdepositional disturbance and, except for a small, discrete manifestation in Locality A, contains no remains of more recent cultures. The composition of the Mesa artifact assemblage and its obvious technological relationship with the Paleoindian cultures of mid-continent North America mark it as distinctly different from other ancient arctic cultures. The presence of the Mesa Complex demonstrates a previously undocumented cultural diversity in Eastern Beringia at the Pleistocene/ Holocene boundary.