The BLM recently launched two new modules in the Recreation and Permit Tracking Online Reporting (RAPTOR) system that will facilitate and standardize the permitting process for science and paleontology resource use.

RAPTOR is an online system that facilitates and standardizes the authorization process and reporting for BLM permits. The user-friendly interface allows applicants and BLM staff to easily interact and check on the status of applications.

In developing the system, the BLM considered process differences among field offices and states to create a flexible but consistent workflow. Applications are automatically passed between staff and the applicant as tasks are created or completed, and email notifications alert users of pending tasks. Geospatial data can be submitted through an ArcGIS interface coupled with RAPTOR tasks. 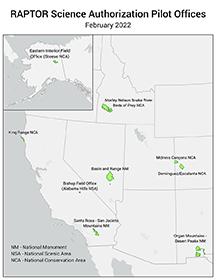 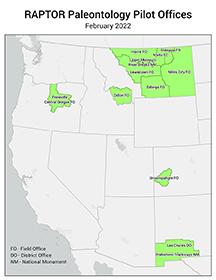 The Special Recreation Permit module was the first to become operational, and the two new modules will accommodate Scientific Research Authorizations and Paleontological Resource Use Permits (Sci/Pal).

The Sci/Pal pilot adds 21 field offices and National Landscape Conservation System units across seven states to RAPTOR. In the first four months of the pilot, more than 60 applications were submitted.

Each year, RAPTOR will expand to include more offices and states, eventually being implemented nationwide. If you are interested in adding your office to the next round of the RAPTOR Sci/Pal rollout, please contact Greg Liggett (gliggett@blm.gov) or Fritz Klasner (fklasner@blm.gov).

All three modules can be accessed at permits.blm.gov.

For more information on RAPTOR see the SharePoint site at: