Checking in on SHANGRI-LA

Preston Rushing, a Project Inspector (PI) based out of the Bureau of Land Management’s (BLM’s) Oklahoma Field Office, is a natural born wanderer.  “My parents were educators, and we’d use our summers off to explore different National Parks, camping and hiking as we traveled,” he said.  Total parks that Preston has visited?  “I have been to 21 different National Parks to date.”  His favorite?  “Oh, that’s a tough one…maybe Zion National Park in Utah, because I really enjoy the hiking there, but I also really love Olympic National Park in Washington state.”

The Cherokee, Ala. native gets plenty of opportunity to indulge that wandering spirit in his job overseeing off-range pastures for wild horses in his four-state territory. Preston travels between Oklahoma, Kansas, Iowa and Nebraska every three months conducting inspections with the ranch managers and assessing the horses under their care.  At least once per year he is accompanied by a BLM contracted veterinarian who also evaluates the horses and makes recommendations for any adjustments which may be needed to keep the animals in optimal health.

We got the opportunity to jump in with Preston on his quarterly visit to a couple of his contractors, and during our windshield time we learned a bit about his life growing up and the educational journey that led him to his position.

He said that while his travels as a youngster instilled an abiding love of the great outdoors, he did not immediately know what he wanted his educational path to be.  “I started out at Northeast Community College in Booneville, Miss. I wasn’t really sure what I wanted to do, so after a couple of semesters I just took off and went to work at Yellowstone National Park.  My parents didn’t realize I had actually dropped out of college at first, and they were not too happy with me when they found out!” he said with a laugh. At his parent’s urging he returned to school, this time at Itawamba College in Fulton, Miss.

It was at Itawamba he was introduced to his true passion of studying forestry by a dedicated professor named Emily Loden, who he says piqued his interest initially by telling him “There is no math in forestry.” He went on to say with a laugh “That was the biggest and only lie she ever told me!”  Preston cites Miss Loden as one of the most influential people in his life, “one heck of a professor,” and says he still relies on her advice and counsel to this day.

After finishing his Associates degree at Itawamba, Preston moved on to Mississippi State and completed his BS in Forestry with a concentration in Environmental Conservation.  By this point he had narrowed down his area of interest to a possible career with the National Park Service, perhaps as a Park Ranger.

A search for an internship program in his area of study, however, landed him a spot at the BLM as a Trainee in the Biological Science/Natural Resources program based out of the Oklahoma Field Office.  After finishing the program with the required number of work hours and a successful job rating, Preston would be eligible for full-time hire with the Bureau after his graduation.

“I didn’t know before I got here that I would be working with the Wild Horse and Burro Program,” he explained.  “I arrived in Oklahoma City and found the cheapest apartment I could, thinking that I would only be here a few months.  My place is a total of about 600 square feet - if I’d known I’d still be living there three years later I probably would have found something a little bigger,” he said with a smile.

The size of his apartment is not as much of an issue for him as it might be for some.  In his role as Project Inspector for the Wild Horse and Burro Program, Preston spends more time on the road than at home.  His primary duty is completing compliance checks on the ranching contractors who house many of the BLM’s over 38,000 horses which are currently in off-range pastures. He has amassed over 60,000 miles on the odometer of his government issued pickup truck since he began driving it just over a year ago.

The PI role requires a bevy of skills in addition to driving, of course.  Preston assesses horses in the holding pastures to assign a score measuring their body condition, identifying them by their color, markings, and the identification number they carry on their hip, experience that he gained on the job under the supervision of the veteran PIs who trained him.  Some of the other job skills required, such as monitoring forage levels and identifying types of grasses and plants are a natural offshoot of his forestry degree.

Our first pasture visit took us south of Oklahoma City to a quiet county where the ranchers we met care for about 1,150 wild horses on their 7,000-acre ranch.  As we drove through the countryside we saw herds of horses in pastures on each side of the road, lifting their heads momentarily as we passed.
Like most of the pastures where wild horses are cared for, this private ranch was once a cattle ranch, fattening 6 – 7,000 steers a year for the market.  Today the fourth-generation family members who own the property divide up the care of the horses amongst themselves, each taking charge of certain pastures for daily herd monitoring as well as feeding chores during winter months when the lush grass mix lies dormant, not providing enough protein to maintain the horses in top condition.  During those months, typically from Dec. through mid-March, the horses are fed a specially formulated feed pellet which delivers to them the optimum ratio of protein, fat and roughage, as well as 10 pounds of high-quality grass hay per head.

As we drove through the thick carpet of turf in our first pasture, golden now with small bits of green just beginning to peek through the tufts, dozens of horses came trotting toward us.  They topped a far ridge as two separate groups, merged into one as they approached our vehicle and stood in a rough semi-circle, eyeing us curiously. Lanky bays jostled with chubby sorrels and sleek pintos for position, horses of every imaginable height and color watched us as we emerged from the truck with our cameras. Brave individuals edged closer to us as their timid herd-mates snorted and backed slowly away.

Preston pulled pre-printed forms from his folder, documenting the body condition of the herd and the amount of forage available to them.  He then took photographs of the animals, which he explained would be uploaded to his computer and submitted to his supervisor for review.

We visited several more pastures in Oklahoma, all filled with healthy herds of equines, every group trotting up to investigate us inquisitively. In each pasture he took meticulous notes and photographs documenting the condition of the horses.

“My job as a PI is to make sure that the horses are kept in optimal health,” said Preston.  “I maintain active working relationships with the contractors who own and manage the ranches so that if an adjustment needs to be made for the benefit of the horses we have an open line of communication.”  He adds that because of the rigorous screening process that takes place during contract placement he is generally only needed in a consultancy role.  “It isn’t my job to tell the ranchers how to run their ranches,” he explained.  “These are all experienced livestock handlers who have been chosen because of their skill in managing herd health as well as the processes they have in place to support these iconic horses.  They all care about the animals as much as we do and take great pride in providing a safe and healthy environment for them.”

Our next inspection started with a drive to Wichita, Kan., where we overnighted before a visit to another of the off-range pastures in the BLM program.  The short stay in Wichita put an exclamation point on the sheer amount of travel that Preston does for his job.  Though we were in another state and 2.5 hours from his home office, he described the available restaurants in the area with the familiarity of a local and was checked into the hotel by a smiling desk clerk who said, “I remember you!”  As we drove to the hotel in the dark hours of the evening our tour guide pointed out the local YMCA where he normally works out during his visits.  It was clear that he embraces the process of travel, making the most out of the plentiful time he spends on the road.

The next morning we toured one of the longest-term and largest ranches to house wild horses for the BLM. This ranch boasted 33,000 acres of beautiful rolling grassland supporting over 2,300 head of horses.  The managers of this facility are long-time ranch employees, a family that remembers back to when the first horses joined them in the early 2000’s.  A few of those original horses remain with them today, swayed of back and moving a bit more slowly but still bright-eyed and clearly enjoying the herd environment in which they live.

The health and longevity of the horses we observed is indisputable testament to the quality of life these animals enjoy, made possible by both the ranchers who minister to them on a day-to-day basis and the BLM employees who oversee their care.  With their days spent grazing in lush pastures, enjoying abundant water, shelter, and the company of their herd mates, these living legends of the west are truly existing in Shangri-La.  They are fortunate to be under the management of such a compassionate and attentive superintendent as Preston Rushing.

On behalf of these horses and all those who love them, thank you for your dedicated stewardship, Preston. 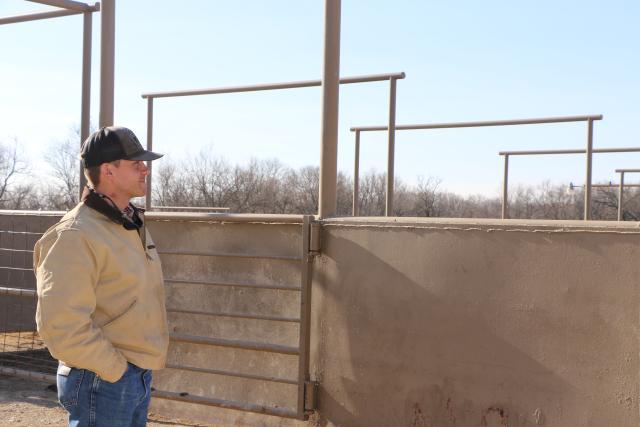 Back to Tales from the Trail