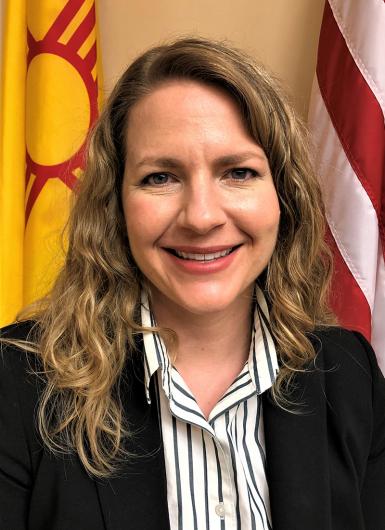 Melanie Barnes is the State Director for the Bureau of Land Management in New Mexico, where she oversees the management of public lands and minerals in New Mexico, Oklahoma, Texas, and Kansas.

She has been the Deputy State Director for Land and Resources for BLM New Mexico, Oklahoma, Kansas and Texas since 2017.  She recently served five months as the Deputy Assistant Director for Resources and Planning with BLM Headquarters, supporting the directorate during their move West, and is a member of the Leadership Academy class of 2020. She most recently served as the Bureau of Land Management Acting New Mexico State Director for the eight months prior to her permanent appointment to this position.

Melanie started with the BLM in 2006 as a Biological Science Technician (STEP) with the BLM Rio Puerco Field Office in Albuquerque, and later was a Surface Protection Specialist with RPFO from 2008-2011. Melanie moved to the New Mexico State Office (NMSO) in 2011 as a Planning & Environmental Specialist.

In 2014 she attended Emerging Leaders and acted as the Assistant Field Manager for Renewable Resources at the Safford Field Office in Arizona. From 2014 to 2015, Melanie acted as the Resources Branch Chief at NMSO, and later took that position permanently.

Prior to working with the BLM, Melanie was a graduate student and teaching assistant at the University of New Mexico, where she completed her Ph.D. in Biology with a focus on plant population ecology, and was introduced to the BLM through setting up research plots on BLM land in New Mexico.

Melanie received a B.A. in Biology from Reed College and spent several years prior to graduate school as a field and laboratory technician in Oregon, Idaho, California, Florida, and Arizona.