Shooting is prohibited in some areas due to high public use and resource concerns. Prohibited areas include all developed recreation sites and other areas where posted. Check the list of specific areas below. You are generally allowed to target shoot on all other BLM-managed public lands, as long as you clean up your targets, shell casings, and trash.

It is illegal to shoot (or place targets) on trees, signs, outbuildings, or other objects on federal lands that are for the public's enjoyment or use. You must follow all state laws and county ordinances on the safe and legal use of weapons and ammunition. National BLM regulations are listed here. Each local area may have extra requirements.

It's your responsibility to know applicable laws and to use firearms in a safe manner. For the most accurate information, contact the managing BLM Office.

Join us in the partnership effort to sustain existing shooting opportunities in the Sonoran landscapes of southern Arizona by participating in Tread Lightly's Respected Access Campaign. Take part in events, and help spread the word about appropriate recreational shooting habits to your shooting friends and partners.

Things to consider when selecting a location:

When shooting on public lands,

Due to safety concerns, litter problems, high fire danger, and wildlife management issues, several areas managed by the Bureau of Land Management are closed to target shooting. These areas include:

We recommend using designated shooting areas for the best resource protection and to reduce litter and firearm shrapnel. A list of designated sites and a map is provided by the Arizona Game and Fish Department.

The BLM has color-coded 1:100,000-scale surface management maps available displaying public and private land ownership, roads, water features, points of interest and other topographic information. The maps do not display specific shooting sites, but it can provide guidance to those seeking appropriate public lands for target shooting. You can purchase these maps from the Arizona State Office and at the various field offices. Contact a BLM field office.

In January 2020, the BLM's Phoenix District published a final Environmental Assessment (EA) and Decision Record approving the Recreational Shooting Sports Project, clearing the way for the construction and operation of five recreational shooting sites on public lands near the Phoenix metro area. The sites will provide active management, enhanced access and increased safety for shooting sports enthusiasts and other public land users near one of the most populated metro areas in the nation.

On March 12, 2021 the BLM published in the Federal Register the final supplementary rules for this project. The rules became effective April 12, 2021. 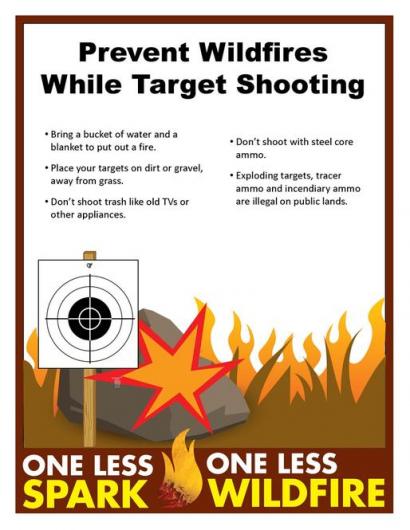