All in a day's walk: Sage-grouse in summer

In summer, the sun rises early in a cloudless blue sky above sagebrush country, and school is in session for broods of Greater sage-grouse.

Half a dozen chicks have hatched in a typical nest and remain vulnerable to predators: coyotes & badgers, among other mammals, eagles & hawks from above.

The chicks themselves are hungry and thirsty.

The chicks grow, and their mother begins leading them afield. As during nesting, they need tall vegetation – for protection and shade, and as a source of food.

Sage-grouse eat the summer leaves and flowers of sagebrush, grasses and forbs. Plants whose leaves and stems are overly coarse or prickly host insects and spiders that are palatable and nutritious. The occasional anthill is another good find.

Finding food and water while evading predators and other hazards is the order of every long day. Effects of wildland fire, drought and climate change can complicate the search.

By late summer, the birds often range into wet meadows adjacent to the sage-steppe, where forbs, insects and water are easier to find.

The brood’s day may end with a dust bath on the way to night roosting. 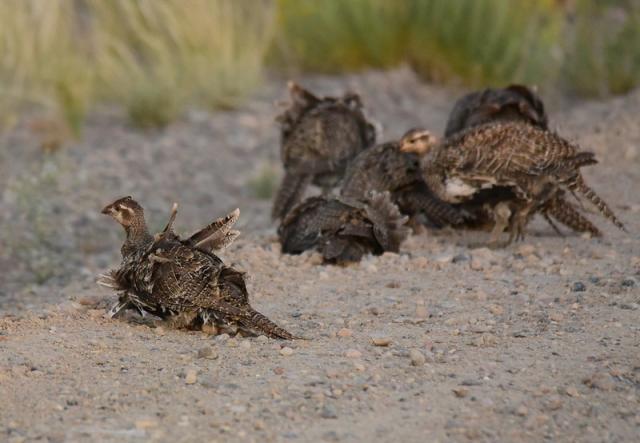 In SEASON: Lands for a thousand dances | All the better for nesting
LEARN MORE: Next steps for sage-grouse | More than the numbers | According to plan | A year in the life