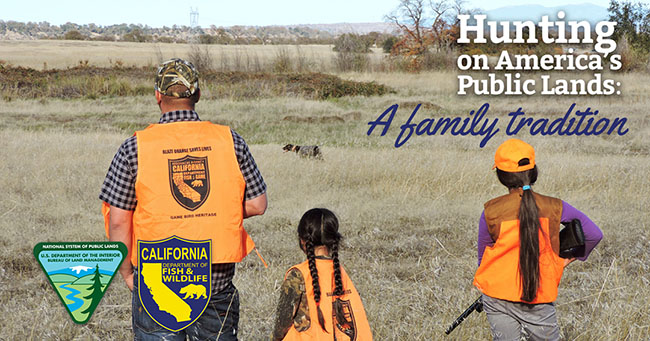 Unless specifically prohibited, public lands managed by BLM are open to hunting under California Department of Fish and Wildlife Hunting Regulations.  A California hunting license is required to hunt within the State of California.

Check on specific hunting season dates and permit requirements with the California Department of Fish and Wildlife.  They publish hunting regulations that list all the season dates. It is your responsibility to know of any hunting restrictions and where they apply. The California Department of Fish and Wildlife regulates hunting and fishing on all public lands. California is phasing-in Assembly Bill 711 that by July 1, 2019, requires nonlead ammunition to be used when taking any wildlife with a firearm anywhere in the state.

It is unlawful for a person to intentionally discharge a firearm or release an arrow or crossbow bolt over or across a public road or other established way open to the public in an unsafe and reckless manner.

Safe and prudent actions should be followed at all times.  The BLM is a multi-use agency.  Other visitors may be using the same areas for recreational uses such as camping, hiking, biking, and rock-hounding.

If you have questions on areas that may be appropriate for hunting, you are encouraged to contact the BLM Field Office having jurisdiction over the area.

Public lands in California are open to fishing under California Department of Fish and Wildlife Fishing Regulations.

For information on hunting and fishing in California, contact the California Department of Fish and Wildlife.

Public lands administered by the Bureau of Land Management (BLM) are available for a variety of undeveloped recreational activities, including target shooting, except where prohibited by federal, state, and local laws.

In California, there are no designated target shooting sites managed by the BLM, but recreational shooting opportunities are available on undeveloped lands, and at several public shooting ranges. Shooting is strictly prohibited in developed recreation sites and other areas where posted. Target shooting is generally allowed on BLM-administered public lands, as long as it is done in a safe manner, without damaging natural resources or improvements on public lands.

Access to public lands must be on public roads. Crossing private lands to access public land is not permitted, unless you obtain and carry written, date-specific permission from the private landowner. The BLM sells Surface Management Status maps (in the desert regions these maps are also called Desert Access Guides)  that can be helpful in locating public lands.  An interactive online map is also helpful in locating public lands.  Not all public land parcels have public access.  Adjacent private property owners are within their legal rights to prevent people from crossing their land to get to the public land.

The BLM Surface Management Status maps and DAG maps do not show specific areas for hunting or target shooting.  Use your BLM maps to locate and evaluate potential BLM areas for their suitability as shooting locations, keeping in mind safety requirements for being far enough away from campgrounds, developed recreation sites, man-made structures such as homes, barns, out buildings, or any other inhabited areas. State and local laws apply.

Once you have selected a possible location, and prior to your trip, check with the BLM office having jurisdiction over that area for current conditions, regulations, fire hazard closures and other information.

Vehicles are restricted to designated routes of travel as posted on BLM maps.  Vehicles are prohibited in all wilderness areas.  You may have to hike from your vehicle to a suitable and safe shooting location; be prepared to hike safely with your firearms and equipment.

Restrictions by County or other Locality

Restrictions by County or Other Locality

Fire Season:  some areas may be closed to target shooting.

California Condor Range:  Since July 1, 2008, the use of projectiles containing lead when hunting big game and nongame species in an area designated as the California condor range have been prohibited by the California Fish and Game Commission.

Riverside County: shooting is restricted in any developed recreational area; within 300 yards of any building, house, dwelling place, corral, feed yard, park, public campground, state riding and hiking trail, or public road; within 1 mile of any incorporated city; between 1⁄2 hour after sunset to 1⁄2 hour before sunrise.(see RC Ord. 514.10 for closed areas, exceptions, and additional details).

Do you want to visit public lands but don't know where they are located?  BLM Surface Management Maps show land ownership and include public and private land, roads, and more.  Maps are $4.00 each and can be purchased at any of our offices.

Don't know which map you need?   Look at this Index and this Deer Hunting Zones Map.

Maps do not display specific hunting and shooting sites. Remember, it is YOUR responsibility to know the laws and regulations - all federal, state, and county regulations apply to public lands.

Plan your route in advance. Stop by your local BLM field office to pick up hard-copy maps, and make sure your course is on public lands. Don’t enter private lands without contacting the landowner and getting permission first. Some BLM maps can also be found on the BLM website.

Know your surroundings. Be on the lookout for other people and potential risks. Always be sure of your target and what is beyond.

Let others know your plans. Before leaving, make sure to touch base with someone and let them know where you will be, when you will be back and develop an emergency plan just in case.

Make sure your equipment is in proper working condition. By checking your equipment, you decrease risk of injury to yourself and others and to avoid accidentally starting a wildfire on public lands. Take steps to make sure trailer chains aren’t dragging, and stay on roads and trails.

Practice Leave No Trace and Tread Lightly principles. Whenever you venture out on public lands, you should follow outdoor ethics to preserve the great outdoors for future generations. Do your part to keep public lands clean and prevent the spread of invasive species.

Practice proper rifle and archery safety. Treat every gun as if it is loaded. Don’t let the muzzle of a firearm point at anything you do not intend to shoot. Keep your finger off the trigger and out of the trigger guard until your sights are on the target and you are ready to shoot. Make sure to never dry-fire a bow, use proper arrows that you store in a quiver and stay alert around broadheads.

Please help preserve our heritage. Treat cultural sites with respect. Do not touch petroglyphs or remove artifacts. Report crimes to resources including vandalism, dumping and suspicious activity at 1-800-637-9152.