Anthropogenic fire is the human use of fire as a tool. In anthropogenic fire, fire is intentionally lit, controlled, and used as a tool for food gathering, hunting large game, enhancing plant resources, managing the landscape, and fighting battles.

Historical accounts suggest that the Takelma women were primarily responsible for the majority of the seasonal burns used for harvesting foods (Tveskov 2002: 22). They used fire to roast and collect sunflower and tarweed seeds, grasshoppers, and yellow jacket larvae, and to make it easier to locate acorns for collection while also suppressing the boring insects. These regular fires in the oak or grass savanna also encouraged the growth of healthier basketry materials; the same was done at higher elevations to encourage the new growth of beargrass, the leaves of which are another important basket-weaving and regalia making material.

An expansive, grassy oak savanna is the perfect foraging ground for game animals like deer and elk. When the Takelma burned the oak savanna, keeping trees out and grass growth abundant, they also ensured the deer and elk populations would stay in the area, providing an important meat source. When it was time to hunt the mammals, larger fires were used once again for deer-drives, frightening the scattered deer into smaller areas and eventually trapping them in a brush enclosure where hunters waited. In some instances, the Takelma used fire during warfare to scare away or hinder travel of competing tribes or to use the smoke to cover up an escape. They also used fire to burn potential enemy hiding places and to signal war activity to nearby groups (Tveskov 2002, Pullen 1996, LaLande and Pullen 1999).

For the Takelma, fire was an essential tool for maintaining healthy food sources year after year. As a result of the tarweed seed, grasshopper, and deer-drive burns, overgrowth of brush and small tree growth was kept to a minimum, maintaining a larger area of open oak savanna. Today we understand that the Takelman use of anthropogenic fire not only provided them with sustainable food resources, but also maintained a healthy habitat for large game animals, encouraged biological diversity, minimized fuels and, subsequently, decreased the probability of catastrophic wildfires (LaLande 2004).

Use of fire by the Takelma 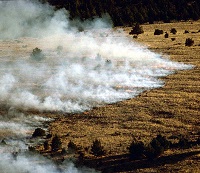 Hunting Deer/Elk: Deer-drive fires were set in the early fall and used to herd the deer into brush traps for capture. These fires simultaneously cleared out old buck brush bushes and encouraged new growth of buck brush and other plants, ideal for deer browsing.

Acorns: Small controlled burns around the oak trees roasted the acorns and made them more visible for collection. These fires simultaneously cleared out the young Douglas-firs and ensured that the acorn providing oak trees would not be crowded.

Tarweed Seeds: Large areas were burned after dusk to clean out the sticky tarweed, leaving the seedpods roasted and accessible for collection. These burns covered whole valley bottoms and/or hillsides, clearing out new seedlings and maintaining extensive open grasslands.

Grasshoppers: Large areas infested with grasshoppers were burned roasting the insects for gathering and consumption. These burns had the same cleaning effect on the landscape as the tarweed burns.