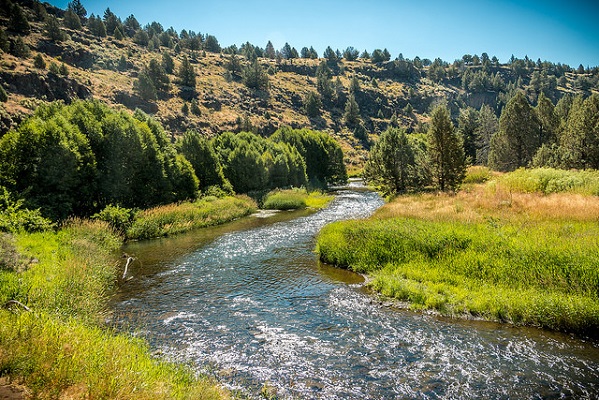 Originating on the western slopes of the Steens Mountains in remote southeast Oregon, the Blitzen River and its many tributaries flow 91 miles northwest to the nearby Malheur National Wildlife Refuge. The snow- and spring-fed rivers cut through dramatic canyons before passing onto the flat open wetlands of the Refuge where there is no outlet. In 1864, an Army commander who, when forced to cross the river during a thunderstorm, named the river Donner ünd Blitzen, which is German for thunder and lightning.

The entire river system is within the Congressionally-designated Steens Mountain Cooperative Management and Protection Area.

Historic sites and resources on Steens Mountain, including the river corridor, reflect the turn-of-the-century period of settlement, homesteading and livestock raising.

Located on the Little Blitzen River is the Riddle Brothers Ranch National Historic District, part of the historic context of pioneer settlement and the development of the livestock industry in the American West. Migrating from western Oregon, three bachelor brothers settled there in the early 1900s and built their ranch by gaining control of water in the area. They sold the ranch in the 1950s, and in 1986 the BLM purchased the property to manage the ranch for its historic value.

The area provides textbook examples of a U-shaped glaciated canyon. Steens Mountain is the northern-most uplifted fault block in the state of Oregon, with well-defined escarpments and graben valleys. It is unique in the region because its upper 2,000 feet were shaped during the ice age as glaciers formed in the creek and streambeds, and the intense weight of the snowcap caused depressions on the surface of the mountains. Over 2,500 was carved and gouged down to a layer of very hard basalt. A second glacial advance in the upper sections of the gorges and scarp created smaller hanging valleys in the tallest areas of the existing gorges.

The river corridor was used by Native Americans, including the Northern Paiute and their predecessors. The area was used for hunting, fishing and gathering plants for food. Prehistoric sites are known to be present in portions of the river system, and conditions for prehistoric site potential exist throughout the corridor.

Steens Mountain is a destination for two- to four-day backpacking or horsepack experiences. Exceptionally high-quality recreation also includes fishing, and one section is designated catch-and-release in one section to protect the population of native fish. Other popular activities are hunting and the viewing and photography of wildlife and scenery.

The river and its tributaries pass through several vegetation zones which are the result of temperature, elevation and precipitation. The lower area features sagebrush and bunchgrass, and the upper subalpine zone offers glaciated canyons and deep basalt formations whose viewsheds are largely untouched and in their natural condition.

The Blitzen and its tributaries host a great variety of plant communities and a large number of sensitive species. Riparian zones are dominated by willows, western birch, mountain alder, black cottonwood and quaking aspen, as well as other species. Sedge and grass-dominated meadows, bog areas, seeps wetland communities, subalpine and alpine communities are found in the system. The uplands include areas dominated by big sagebrush, western juniper, mountain mahogany, quaking aspen and mountain snowberry, and understory species include Idaho fescue, bluebunch wheatgrass and needlegrasses.

Raptors, such as the American kestrels, and great horned owls nest along canyon rims of the Blitzen River and its tributaries, and the cliffs are also home to nesting turkey vultures and ravens. Sage grouse stay in the upper, flatter terrain, and chukars and valley quail are found along the river.

Interpretive exhibits illustrating the natural and cultural history of the area dot Steens Mountain. The Page Springs Interpretive site is located at the south end of the Page Springs campground and offers information on two local hikes. Maps and other literature are available at the BLM office in Hines, Oregon.

Auto-touring is a common activity during the snow-free months along the high-elevation Steens Mountain Loop Road. A high-clearance vehicle is advised as some portions of this road are very rough. When open, this loop road is accessed via State Highway 205. Steens Mountain Loop Road, also known as Steens Mountain Back Country Byway (BCB), passes through the narrow highlands of the mountain, descends over the steep and rough Rooster Comb section, then traverses west to the south entrance to the Steens Loop Road, about 11 miles south of Frenchglen. The Steens Mountain Loop Road may be driven in either direction, but drivers may wish to avoid hazards of the Rooster Comb section. Steens Loop Road also provides access to the Donner und Blitzen WSR system including parts of Donner ünd Blitzen River, Fish Creek, Little Blitzen River, Big Indian Creek, and Little Indian Creek.

Popular with birdwatchers and fishers, the Page Springs campground is located just outside the hamlet of Frenchglen at the base of Steens Mountain. Both camping and a day-use picnicking are available year-round on a first-come, first-served basis. A fee is charged for camping only. Page Springs make a great location to make a base camp; however, during the milder months the remote Fish Lake, Jackman Park and South Steens campgrounds are open seasonally.

With its trailhead located within Page Springs Campground, the 3.8-mile Blitzen River Trail offers the most direct access to the renowned fishing waters of the Blitzen River. Also at the campground is the shorter, 1-mile Wilderness Trail which offers greater elevation-and viewing opportunities-of the nearby river and desert landscapes. Both trails are out-and-back.

For overnight backpackers, the Fred Riddle, Nye and Wet Blanket trails descend steeply into the glaciated canyon of the Little Blitzen River connecting with the river’s namesake trail.

There are limited opportunities for boating in the remote Donner ünd Blitzen River system and no boating facilities exist. Advanced boating skills are required in this demanding and hazardous river system.

The Blitzen is known for its world class redband trout fishery and fly fishing is considered some of the finest in Eastern Oregon. The Oregon Department of Fish and Wildlife limits fishing on Little Blitzen to catch-and-release year-round.

Planning for river management is an essential part of preserving the outstanding remarkable values for which each river was designated as wild and scenic. A river management plan has been prepared for the Donner ünd Blitzen Wild and Scenic River: 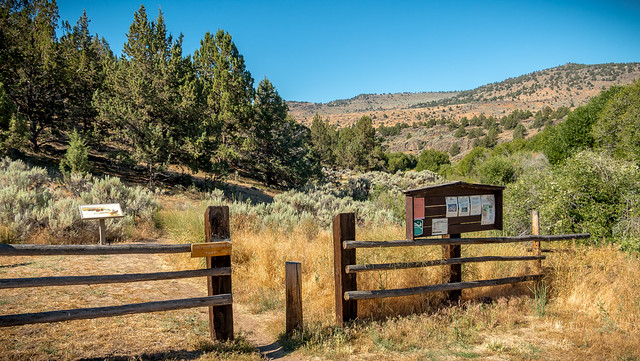