The Iditarod Trail is the only winter trail in the National Trails System and the only Congressionally-designated National Historic Trail in Alaska. The Iditarod National Historic Trail system is comprised of a 1,000-mile main trail between Seward and Nome, and an additional 1,400 miles of side/connecting trails that link communities and historic sites, or provide parallel route.

Congress established the Iditarod as a National Historic Trail in 1978. A May 17, 1978, Senate report noted that the trails comprising the Iditarod National Historic Trail “…offer a rich diversity of climate, terrain, scenery, wildlife, recreation and resources in an environment largely unchanged since the days of the stampeders. It is the isolated, primitive quality of this historical environment that makes the National Historic Iditarod Trail proposal unique. Nowhere in the National Trail System is there such an extensive landscape, so demanding of durability and skill during its winter season of travel. On the Iditarod, today’s adventurer can duplicate the experience and challenge of yesteryear.”

Today, BLM works with partners to maintain and promote the historic qualities that make the Iditarod unique among our nation’s National Historic Trails. As the designated Trail Administrator, BLM facilitates efforts by volunteers and local, state and federal agencies on behalf of the entire trail. BLM maintains about 120 miles of the trail, including five public shelter cabins. The trail segments that cross BLM-managed lands are managed as part of BLM's National Conservation Lands.

Most of the historic Iditarod Trail is located on public lands managed by the State of Alaska or federal agencies (although some segments pass over private lands). No one entity manages the entire historic trail - management is guided by a cooperative plan adopted in the mid-1980s. The federal Bureau of Land Management coordinates cooperative management of the trail and is the primary point of contact for matters involving the entire trail.

Each year local groups, community clubs and individuals contribute their personal time and money to maintain and improve the Iditarod Trail.  The statewide, nonprofit Iditarod Historic Trail, Inc., helps protect and improve the trail and keeps the "lore of the trail" alive.

Who owns the trail? The Iditarod is a complex trail system, stretching from Seward in the south, to Nome on the Bering Sea.  It crosses lands owned by several Native corporations, municipal governments and the State of Alaska as well as federal lands managed by the BLM, the U.S. Forest Service, the U.S. Fish and Wildlife Service, and the Department of Defense. In all there are 10 institutional land managers and numerous private owners.

Today’s Iditarod Trail, a symbol of frontier travel and once an important artery of Alaska’s winter commerce, served a string of mining camps, trading posts, and other settlements founded between 1880 and 1920, during Alaska’s Gold Rush Era. Alaska’s gold rushes were an extension of the American mining frontier that dates from colonial America and moved west to California with the gold discovery there in 1848. In each new territory, gold strikes had caused a surge in population, the establishment of a territorial government, and the development of a transportation system linking the goldfields with the rest of the nation. Alaska, too, followed through these same general stages. With the increase in gold production particularly in the later 1890s and early 1900s, the non-Native population boomed from 430 people in 1880 to some 36,400 in 1910.

In 1912, President Taft signed the act creating the Territory of Alaska. At that time, the region’s transportation systems included a mixture of steamship and steamboat lines, railroads, wagon roads, and various cross-country trail including ones designed principally for winter time dogsled travel. Of the latter, the longest ran from Seward to Nome, and came to be called the Iditarod Trail.

While marked off by an official government survey, in many places it followed preexisting Native trails of the Tanaina and Ingalik Indians in the Interior of Alaska. In parts of western Alaska east of Unalakleet and along the coast, it followed ancient routes traveled by the Inupiaq and Yupik Eskimos. Thus, Alaska Natives long used portions of what came to be today’s Iditarod Trail, and before the first non-natives came to Alaska had developed special winter modes of travel over it—the dogsled and snowshoe.

Permitted Events on the Iditarod Trail

The Iditarod Trail has a rich history, but in this modern era it is known race event route.

Major race events that are permitted by the BLM are: the Iditarod Trail Sled Dog Race, the Iron Dog Snowmachine race, and the Iditasport ultra marathon for skiers, runners, and mountain bikers. Learn more about Special Recreation Permits. 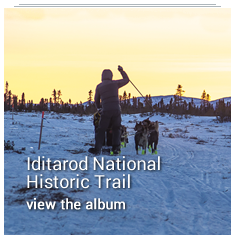