Alaska Native Claims Settlement Act (ANCSA) Sec. 17(d)(1) withdrew all unreserved public lands in Alaska for 90 days. During that time the Secretary was required to review the public lands to determine if any of the lands should be withdrawn to ensure the public interest in the lands was protected. Some of the withdrawals created by this section of ANCSA identified additional lands for selection by ANCSA Native Corporations and the State of Alaska. These withdrawals had a secondary purpose of classification for protection of the public interests. The withdrawals are what we now call “d-1 withdrawals.”

In many cases, the original purpose of the d-1 withdrawals is no longer applicable; however, without land use planning guidance for these lands, revocation cannot take place.

In 2004, the Alaska Land Transfer Acceleration Act (ALTAA) Sec. 207, addressed the lingering d-1 withdrawals.  ALTAA required the Secretary review the d-1 withdrawals to determine if any portion of the withdrawn lands can be opened for entry under the public land laws.

In 2006, BLM Alaska prepared the required Sec. 207 report on the withdrawals for the Secretary, which was then submitted to Congress. The report recommended revoking the d-1 withdrawals on approximately 50.1 million acres in Alaska of BLM-managed land. In the report, the BLM recommended that the land use planning process provided the most appropriate way to address review of these withdrawals. The report also recommended maintaining d-1 withdrawals on approximately 6.7 million acres until a more appropriate withdrawal or land management prescription can be put into place through the land use planning process.

In 2018, BLM Alaska revoked the first set of d-1 withdrawals in the Goodnews Bay area per the recommendation of the Bay Resource Management Plan. In 2019, d-1 withdrawals in the Fortymile region of the Eastern Interior planning area and the Bering Glacier region of the East Alaska planning area were revoked consistent with the recommendations made in their respective resource management plans.

In January 2021, BLM Alaska published Public Land Order (PLO) 7899 which would have revoked d-1 withdrawals on BLM-managed land within the Kobuk-Seward Peninsula planning area.  At the same time, BLM Alaska prepared PLOs for the Ring of Fire, Bay, Bering Sea – Western Interior, and East Alaska planning areas, totaling approximately 28 million acres for all five planning areas; however, these PLOs were never published in the Federal Register.  The Department of the Interior (DOI) subsequently identified legal defects in the decision-making processes that led to these PLOs and as a result, deferred the opening order for PLO No. 7899 (Kobuk-Seward Peninsula) until April 16, 2023, and deferred publication for the remaining PLOs (7900 – 7903) until further review is complete.

In the interim, DOI directed the BLM to prioritize completing an environmental assessment (EA) to open lands within the five planning areas to selection through the Alaska Native Vietnam-era Veterans Land Allotment Program established by Section 1119 of the John D. Dingell, Jr. Conservation, Management, and Recreation Act of 2019.  This EA resulted in PLO No. 7912, which partially revoked d-1 withdrawals and opened approximately 27 million acres to selection under the program.

BLM is now addressing the legal defects in the decision-making process, including ensuring compliance with the requirements of the National Environmental Policy Act by preparing an environmental impact statement (EIS).  The EIS will consider the impacts of revoking the d-1 withdrawals on lands described in 2021 public land orders 7899, 7900, 7901, 7902, and 7903. The proposed revocations have the potential to allow obtaining mining claims (location) or applications for title (entry) under public land laws, including the mining laws, and may result in changes to the land use. The EIS will also consider a range of alternatives. Alternatives could include full or partial revocation of the ANCSA 17(d)(1) withdrawals, meaning that we could evaluate an alternative that revokes some areas of the withdrawals but leaves other areas with the withdrawal in place.  The EIS and record of decision are anticipated to be published in late 2024. A PLO implementing the decision made through this process will follow. 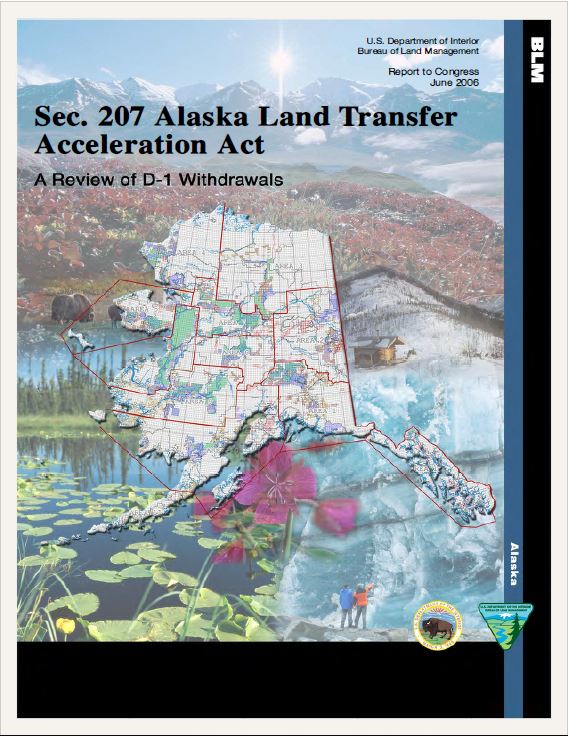 Download the Sec. 207 of the Alaska Land Transfer Acceleration Act, A review of D-1 Withdrawals. 2006 Report to Congress

Or, view a copy of the report at these BLM offices: