The sites were selected because they are in easily accessible areas and have minimal conflicts with other recreational activities or with natural or cultural resources, housing developments, commercial permits, or energy and telecommunications lines.

“We’re proud to see our first sites come to completion,” said Phoenix District Manager Leon Thomas. “This project required a lot of effort to get the sites ready to open. I want to thank staff at field, district, state, and national levels for their hard work in getting these sites past the finish line.”

Phoenix is the fifth-largest city in the United States and is in one of the fastest-growing counties in the nation. There has been an increase in demand for recreational access on the public lands surrounding the metro area, including demands for recreational shooting.

In January 2020, the BLM approved the construction and operation of five recreational shooting sports sites within the Phoenix District. Construction of the Baldy Mountain site began in the fall of 2020 followed closely by the Box Canyon, Church Camp, and Saddleback Mountain sites. A fifth site, Narramore Road, has been planned, but construction has yet to be funded.

Baldy Mountain, Church Camp Road, and Saddleback Mountain are in the BLM Hassayampa Field Office area north of Phoenix, and Box Canyon is in the BLM Lower Sonoran Field Office area west of the city of Maricopa, Arizona. These areas combined include about 4,109 acres of BLM-managed public lands.

Initial visitor input has been positive. The district is partnering with the University of Alaska-Fairbanks and Arizona State University to conduct visitor use surveys on recreational target shooting, both at the developed sites and at dispersed shooting sites in the Phoenix District.

This project builds upon years of BLM Arizona’s efforts with partners such as Arizona Game and Fish Department and shooting sports groups to educate the public on safe and responsible recreational target shooting on public lands. These include running public service announcements in Phoenix-area theatres and on cable television, and responsible recreation campaigns on social media. Those efforts will continue in the future.

Check out the photo album. 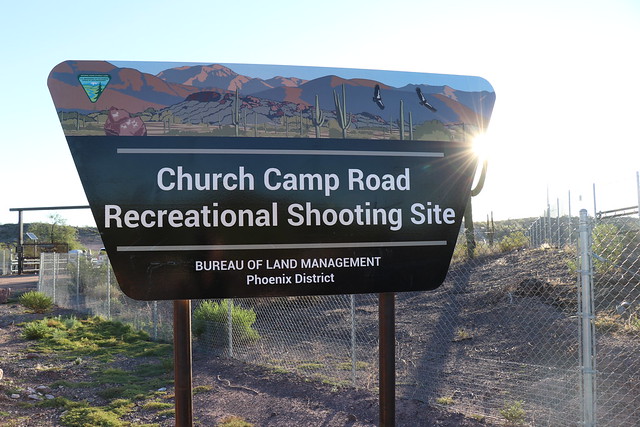