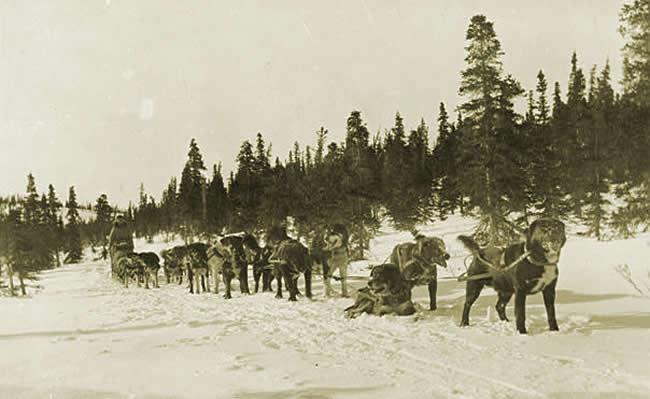 Today’s Iditarod Trail, a symbol of frontier travel and once an important artery of Alaska’s winter commerce, served a string of mining camps, trading posts, and other settlements founded between 1880 and 1920, during Alaska’s Gold Rush Era. Alaska’s gold rushes were an extension of the American mining frontier that dates from colonial America and moved west to California with the gold discovery there in 1848. In each new territory, gold strikes had caused a surge in population, the establishment of a territorial government, and the development of a transportation system linking the goldfields with the rest of the nation. Alaska, too, followed through these same general stages. With the increase in gold production particularly in the later 1890s and early 1900s, the non-Native population boomed from 430 people in 1880 to some 36,400 in 1910.

In 1912, President Taft signed the act creating the Territory of Alaska. At that time, the region’s transportation systems included a mixture of steamship and steamboat lines, railroads, wagon roads, and various cross-country trail including ones designed principally for winter time dogsled travel. Of the latter, the longest ran from Seward to Nome, and came to be called the Iditarod Trail.

While marked off by an official government survey, in many places it followed preexisting Native trails of the Tanaina and Ingalik Indians in the Interior of Alaska. In parts of western Alaska east of Unalakleet and along the coast, it followed ancient routes traveled by the Inupiaq and Yupik Eskimos. Thus, Alaska Natives long used portions of what came to be today’s Iditarod Trail, and before the first non-natives came to Alaska had developed special winter modes of travel over it—the dogsled and snowshoe.