A Living Journal of the American West

Pompeys Pillar National Monument encompasses 51 acres on the banks of the Yellowstone River with a massive sandstone outcrop covering about 2 acres at its base and rising 120 feet high toward Montana’s Big Sky. The monument’s premier location at a natural ford in the Yellowstone River, and its geologic distinction as the only major sandstone formation in the area, have made Pompeys Pillar a celebrated landmark and outstanding observation point for more than eleven thousand years of human occupation. Hundreds of markings, petroglyphs, and inscriptions left by visitors have transformed this geologic phenomenon into a living journal of the American West. 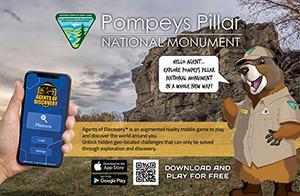 Kids! Are you ready to discover Pompeys Pillar? Learn how to download and play the Agents of Discovery App when you arrive. *Pompeys Pillar does not have WIFI, so be sure to download before your visit! 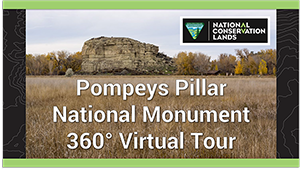 The Pompeys Pillar National Monument Virtual Tour allows you to take a self-guided tour of the site from your desktop or mobile device. "Walk" up the steps of the Pillar boardwalk to discover historic and prehistoric inscriptions on the rock. Climb further to experience a 360 degree view of the surrounding area from the top of this remarkable 120 foot tower! 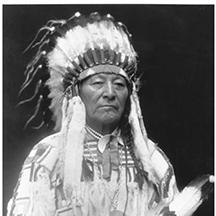 Pompeys Pillar is within the homeland of the Apsaalooke, or Crow people. One Crow name for the Pillar is, Iishbiiammaache, or “The Mountain Lion’s Lodge.” Ethnographic and archaeological evidence indicates that the Pillar was also a place of ritual and religious activity for several American Indian tribes for over 11,000 years. Hundreds of pictographs and petroglyphs on the face of the rock reflect the importance of the monument to early peoples.    Read more 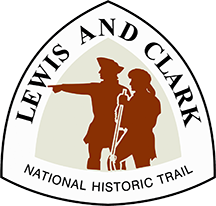 Captain William Clark, Sacagawea, her 18-month old son (nicknamed "Pompey"), and a crew of 11 men stopped near the rock outcropping on their return trip from the Pacific Coast. On July 25, 1806, Clark carved his signature and the date into the rock. The historic inscription is one of the few remaining pieces of physical evidence still visible on the Lewis and Clark National Historic Trail.   Read more 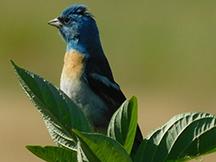 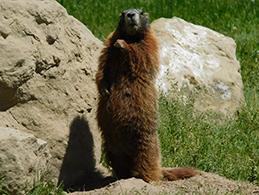 Much of the wildlife population is a result of the site’s thriving riparian zone, a healthy plant community of grasses, willows and cottonwood trees. The river supports many neo-tropical migratory bird species and the riparian corridor allows for nesting and safe resting cover during migration.

Pompeys Pillar is at a natural ford in the Yellowstone River. In addition, the mouth of Pompeys Pillar Creek on the north side of Yellowstone and the mouth of Fly Creek on the south form natural passageways leading to the river ford at Pompeys Pillar. As a result, the area has been a crossroads throughout history for hunters and their prey such as once-prominent herds of buffalo. In addition to Clark’s signature, the sandstone is marked with literally hundreds of other etchings and drawings.

The Pillar and the cliffs across the river are composed of sandstones and shales of the Upper Cretaceous Lance (Creek) Formation. The Lance formation is composed of alternating beds of light-yellow to grayish sandstones, bluish to grayish sandy shale, drab yellow and gray clays, and clay shale.  Elevations on the base of the Lance Formation show that the formation is inclined downward toward the east at a rather uniform rate of about 12ft to the mile. The formation thickens from north to south​ and there is little thickness change from east to west. 30% of the Lance formation is made up of channel sandstones 20ft or thicker. 70% of the Lance is thinner sandstone and finer grained interfluve sedimentary rocks​.

William Clark may have been the first to record a paleontological find in the area immediately downstream from Pompeys Pillar. “I employed my Self in getting pieces of the rib of a fish which was Semented within the face of the rock. ...it is 3 feet in length though a part of the end appears to have been broken off.” It is thought that this reference is to the discovery of a fossilized rib in the uppermost Hell Creek Formation. The rib probably came from a terrestrial dinosaur. The most common terrestrial dinosaurs of that period in this area were the hadrosaurus, triceratops, albertosaurus and tyrannosaurus.

Pompeys Pillar is a National Conservation Lands site. The area contains three distinct ecosystems: the mixed grass prairie, the river/riparian area, and the sandstone cliffs of the Pillar.

The Yellowstone can be characterized as a meandering braided prairie river. The Yellowstone is the longest free-flowing river in the lower 48 states and provides rich, fertile farmland and habitat for many wildlife and bird species. The riparian areas along the river contain several cottonwood community types. Many standing cottonwood trees within the flood plain are estimated to be more than 100 years old.

Pompeys Pillar is a home to many wildlife species and is designated a Watchable Wildlife Viewing Area. The more common species include mule and whitetail deer, fox, coyotes, raccoons and numerous small mammals, amphibians and reptiles. While not very common, there have been a few mountain lion and black bear sightings. Much of the wildlife population is a result of the site’s thriving riparian zone, a healthy plant community of grasses, willows and cottonwood trees that stabilize the riverbank and provide important habitat. At the time William Clark traveled through the area, he made note of seeing hundreds of buffalo, elk, wolves, and deer. Today, although the area supports a variety of wildlife, it is not to the extent nor diversity that Clark noted.

Clark noted seeing wildlife in abundance here and elsewhere along the Yellowstone, “for me to mention or give an estimate of the different Species of wild animals on this river particularly Buffalow, Elk Antelopes & Wolves would be increditable. I shall therefore be silent on the subject further.”

The Yellowstone River supports a remarkable diversity of bird species. Many neo-tropical migratory bird species use the riparian corridor at Pompeys Pillar for nesting and/or as safe resting cover during migration. More than 160 bird species have been observed on or near Pompeys Pillar, including numerous waterfowl, songbirds, shorebirds, woodpeckers, raptors, swallows, and game birds. Some birds observed in the area are on the BLM’s sensitive species list: the ferruginous hawk, the loggerhead shrike, Franklin’s gull, Forster’s tern, the northern goshawk, the sage grouse, the peregrine falcon. Peregrine falcons have historically occupied rocky cliff habitat near Pompeys Pillar. Twenty-one peregrines were released east of Pompeys Pillar in 1996. Great horned owls often nest and lay eggs on the south and west sides of the Pillar’s cliff walls. Bald eagles can often be seen among the cottonwood trees and there is currently a large nest on the island on the east side of the ACEC. Ospreys are often seen along the riverbanks, and two large nests sit on the Bundy Bridge and can be seen from Pompeys Pillar.

When the Monument is open (see below for season and hours), a $7 standard fee is charged for each vehicle.  There is no separate fee for the interpretive center. All fees are returned to the site and used to maintain and improve the facility. All valid federal recreation passes are honored at the site.

Rates are based on number of passengers.

Even when the Monument is closed, visitors may still walk into the site during daylight hours.  The walk from the gates to the Pillar is about 3/4 mile.  Special arrangements can be made during the off-season for school programs and other special events.  Facilities available are the boardwalks, walkways, and vault toilets. All buildings will be closed.

The boardwalk up the Pillar leads to Clark's signature and continues to the top of mesa. It is approximately 1,000 feet long and contains about 200 steps.

The day use area is ideal for picnicking or relaxing. It is adjacent to the Yellowstone River and shaded by large cottonwood trees.

The interpretive center, restrooms, parking lot and day use area are fully accessible.

Pets must be on a leash at all times.

The Pompeys Pillar Interpretive Center opened in 2006. Exhibits in the 5,700-square foot center relate the journey of Captain William Clark and his detachment, including Sacagawea and her son Pomp, down the Yellowstone River Valley in 1806. The center also addresses native culture, flora and fauna, the Lewis and Clark Expedition, and the historical legacy of Pompeys Pillar through the changes of the 1800s. A number of J.K. Ralston paintings and sketches are on permanent display.

Please respect our heritage and treat the Monument and its resources with respect. Do not deface any tree, shrub, rock, or ancient Indian artifact. Do not touch petroglyphs or remove any artifact. Not only is this illegal, but it erases evidence of past generations and deprives others of the knowledge about these sites.

The Friends of Pompeys Pillar provides substantial and much needed support for the Monument. This 200-member, nonprofit organization supplies more than 35 volunteers to assist visitors at the site and to operate the interpretive center. Profits from this enterprise assist with operation of the Monument. More than 2,500 hours of volunteer time are donated each year.

The Pillar overlooks the Yellowstone River about 25 miles east of Billings, Montana. The area is easily accessible from Interstate 94, using exit 23, or from Montana Highway 312. The Pillar is a sandstone butte or mesa and covers about two acres at its base and stands about 150 feet high. Because it is the only sandstone outcrop on the south side of the Yellowstone River for several miles in either direction, it has been a landmark for centuries.

Pompeys Pillar is at a natural ford in the Yellowstone River. In addition, the mouth of Pompeys Pillar Creek on the north side of Yellowstone and the mouth of Fly Creek on the south form natural passageways leading to the river ford at Pompeys Pillar. As a result, the area has been a crossroads throughout history for hunters and their prey such as the once-prominent buffalo herds. In addition to Clark’s signature, the sandstone is marked with literally hundreds of other etchings and drawings. Clark noted evidence of Native American use, “The Indians have made 2 piles of Stone on top of this Tower. The natives have ingraved on the face of this rock the figures of animals....” Fur trappers of the early 1800s, military expeditions, railroad workers, and early settlers used the sandstone as a registry of their passing. In a very real sense, Pompeys Pillar’s sandstone facets hold a vivid history of the unfolding West. 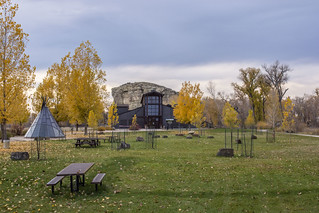