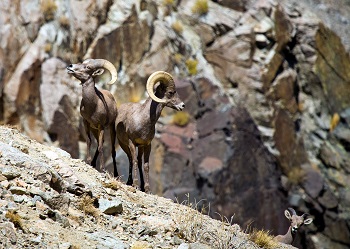 Nevada is primarily defined by two broad ecosystems; the Great Basin and Mojave deserts. Four major North American deserts have been classified, with the Great Basin considered the only cold desert. The deceptively simple structure and vegetative characteristics of the Great Basin and Mojave Deserts mask complex community dynamics, disturbance regimes, and system resiliency. Nevada supports the second largest area of remaining sagebrush, which is home to iconic species such as greater sage-grouse, mule deer, pronghorn, and desert bighorn sheep. Unfortunately, the Great Basin desert contains the second highest number of imperiled endemic species in the United States. The Mojave, the smallest and driest North American desert, is home to over 2,500 species of plants and animals with more than 100 considered to be imperiled.

Nevada BLM manages more land – 48 million surface acres and 59 million subsurface acres –than any other BLM state except Alaska. When compared to the rest of the Bureau, the BLM in Nevada encompasses the most habitat for sage-grouse, though not the most birds, has the largest mining program, the second-largest grazing program, and the second-largest fire management organization. Add to that the variety of other major activities; recreation, land sales, wild horse and burro stewardship, renewable energy development, livestock grazing, and more, and you can understand that BLM’s responsibilities for wildlife habitat management match the vastness of the land itself.

BLM in Nevada works closely with the Nevada Department of Wildlife (NDOW), who has statutory authority to manage the wildlife, to provide wildlife habitat that supports NDOW’s mission and responsibilities. Resource Management Plans provide the primary management guidance for individual BLM districts, including standards and guidelines for maintaining or improving the various resources that occur within that district. BLM programs must consider wildlife, habitats, and sensitive species issues in our decision-making processes.