Historic Fort Egbert: Encounter Alaska's Frontier Past at the End of the Road 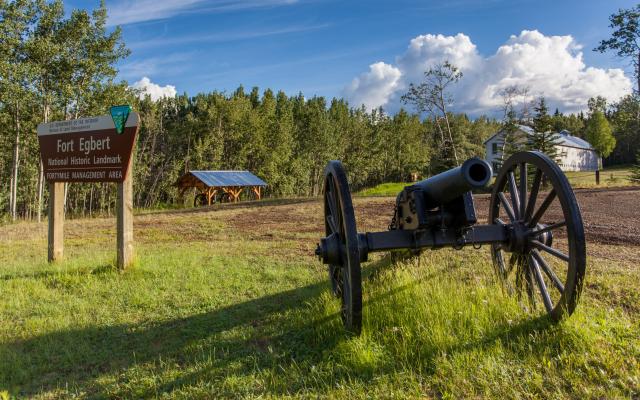 If you drive Alaska’s rugged, 160-mile Taylor Highway to the Yukon River, you’ll not only have reached the proverbial ‘end of the road’ – eastern Alaska’s bare-bones road network extends no further – but you’ll also find yourself in the tiny town of Eagle, a charming and unique community with an oversize role in Alaska’s territorial past. Central to Eagle’s history is Fort Egbert, a restored, early 20th-century military outpost managed today by the Bureau of Land Management with help from the National Park Service and the Eagle Historical Society and Museums.

The U.S. Army established Fort Egbert in 1899, amid rumors of lawlessness among gold miners and settlers lured to the region by the Klondike Gold Rush across the border in Canada. During its short existence, Fort Egbert was to bring profound changes to the region and reshape Alaska's ties to the rest of the nation. Although the fort was largely abandoned in 1911, an Army Signal Corps contingent remained there to operate a telegraph and wireless station until 1925. Today the BLM and its partners manage outdoor exhibits and five restored structures at Fort Egbert, which is part of the Eagle Historic District National Historic Landmark.

You can explore Fort Egbert on your own or take advantage of the Eagle Historical Society and Museums’ daily walking tour of the town, museum, and fort. The two- to three-hour guided tour starts at the Courthouse once daily at 9 a.m. from Memorial Day through Labor Day. For more information call the Eagle Historical Society and Museums at 907-547-2325.

A highlight of any visit to Fort Egbert is the walk through the mule barn, the largest remaining building at the fort. The barn once housed 53 animals and was used until 1911. Kennels were added to the south side of the structure for the sled dogs that pulled equipment and supplies for soldiers at the fort. Today the mule barn’s numerous exhibits about life at the fort include a blacksmith area and old wagons.

Near the mule barn is the noncommissioned officers' quarters, the only surviving example of three such buildings constructed at Fort Egbert. Built in 1900 at a cost of $1,786.30, the structure provided living quarters for the quartermaster and hospital steward. A five-year restoration effort involved repairing damage to original materials such as doors, flooring, and wood trim, as well as meticulously replicating period wallpaper.

For those spending the night in Eagle before returning to the twists and turns of the Taylor Highway, BLM’s 18-site Eagle Campground is a short walk from town and fort.