The United States holds more than half the world’s oil shale, a fine-grained sedimentary rock containing organic matter from which petroleum products may be distilled. Although it has long been seen as a potential source of secure, reliable, and affordable energy, the technology to produce oil from oil shale in commercial quantities has been elusive.

The largest known deposits of oil shale are in a 16,000-square mile area of the Green River Formation in Colorado, Utah, and Wyoming with a total in-place oil shale resources estimated at 4.3 trillion barrels.

Also present but largely undeveloped on public lands is tar sands, sedimentary rocks containing a heavy hydrocarbon compound called bitumen, which can be refined into oil. While production of oil from Canadian tar sands in Alberta is common and abundant, U.S. tar sands have different properties and would require different – and as yet undiscovered – processing techniques.

The largest deposits of tar sands in the world are found in Canada, and Venezuela, and much of the rest is found in various countries in the Middle East. In the United States, tar sands resources are primarily concentrated in eastern Utah, mostly on public lands. The in-place tar sands oil resources in Utah are estimated at 12 billion to 19 billion barrels.

Section 21 of the Mineral Leasing Act of 1920 (30 U.S.C. 241), authorizes the BLM to lease Federal lands for oil shale and tar sands development.

To learn more about how to unlock the potential of these energy sources, the BLM undertook a Programmatic Environmental Impact Statement, which was published in 2013. Visit the PEIS website.

The final PEIS amends 10 resource management plans and identifies areas that will be made available for potential leasing, exploration, and development of oil shale and tar sands resources.

Areas that are made available to oil shale development would first be offered as a research, demonstration, and development (RD&D) lease. The BLM could issue a commercial lease after a lessee satisfies the conditions of its RD&D lease and meets all Federal regulations for conversion to a commercial lease. The final PEIS also includes provisions for wildlife habitat conservation including Greater Sage-Grouse habitat.

The Federal Oil Shale RD&D program, initiated in response to the Energy Policy Act of 2005, began with a call for nominates published in the Federal Register.

This call resulted in the issuance of six 160-acre RD&D tracts with associated 4,960-acre preference lease areas, should the research prove commercially viable. Five of the leases are in Colorado and went to Chevron Shale Oil Co., EGL Resources Inc., and Shell Frontier, which took three leases. The sixth lease in this round was issued in Utah to Oil Shale Exploration Co.

A second round of RD&D leases were issued after a 2009 call for more nominations. Two 160-acre leases with associated 480-acre preference right leases were issue in Colorado – to ExxonMobil Exploration CO. and Natural Soda Holdings Inc.

All of the RD&D leases were meant to encourage industry to develop and test technologies aimed at developing oil shale resources on a commercial scale. The initial term of the leases is 10 years.

For the first round RD&D leases, the companies have the option to extend their lease for up to five years if they can sufficiently prove that their research is indicating progress toward a process that can achieve commercial production. 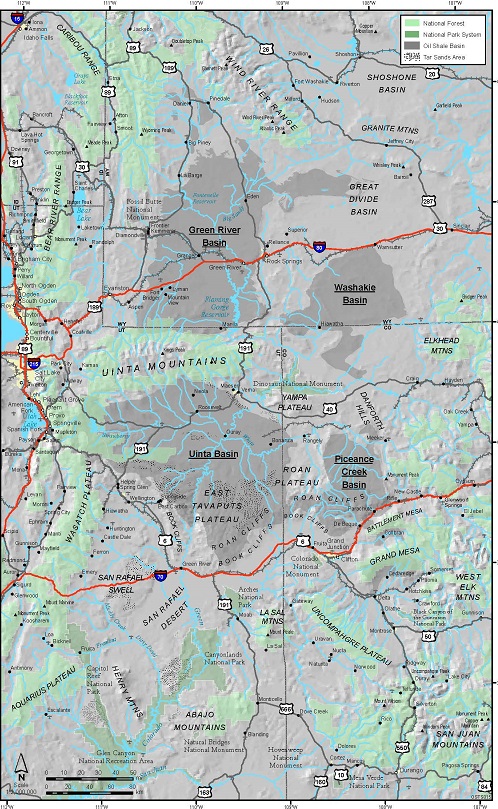