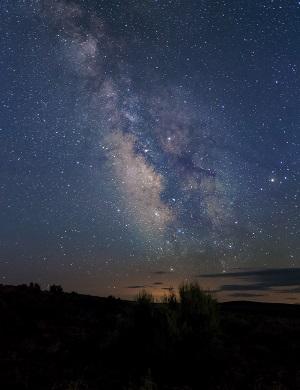 Located more than 150 miles north of Reno and surrounded by only a few small communities, the Massacre Rim Dark Sky Sanctuary suffers little from light pollution.

The best star gazing happens in July when the Sagittarius and Scorpio constellations are their highest in the sky. The Perseids meteor shower, a prolific meteor shower associated with the comet Swift-Tuttle, is visible from mid-July each year. It peaks in early August when dozens of shooting stars are visible each hour.

The Massacre Rim Dark Sky Sanctuary is located within the traditional territory of the Northern Paiute.  The Massacre Rim derives its name from the steep escarpment along the western edge of the volcanic plateau and its proximity to the Massacre Lakes, a series of seasonally-dry lakes.  Although the origin of the name “Massacre Lakes” is unknown, most likely, the name refers to stone markers under which weary travelers would bury their unneeded supplies. Later emigrants falsely interpreted these markers as graves. 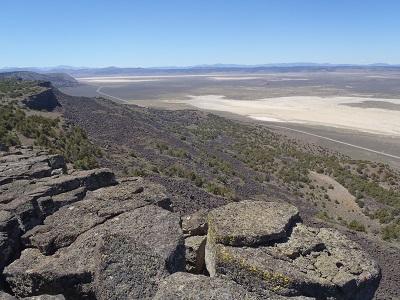 Representative of the volcanic history of the area. The Sanctuary is located on a volcanic plateau surrounded by seasonally dry lake basins to the west and south.  The Massacre Rim, a steep 1,200-foot escarpment, is located along the western boundary of the Sanctuary.  In a few places, basaltic flows cap previous rhyolitic flows; this is most evident on Painted Rock, a large hill just south of the Sanctuary.  These flows date to the Miocene and are millions of years old. 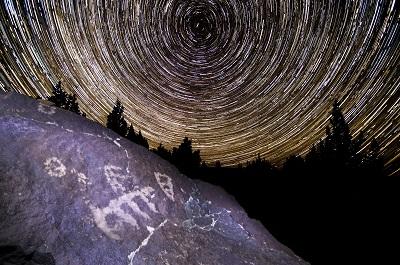 Humans have inhabited the Massacre Rim area for over 10,000 years. The area contains numerous archaeological sites, including an astonishing number of prehistoric petroglyphs. The Massacre Rim Wilderness Study Area (WSA) is within the traditional territory of the Northern Paiute.

The WSA is located near the border between two bands of the Northern Paiute: the Kidütikado (Groundhog-Eaters) and the Aga’ipañinadökadö (Trout-Eaters). The traditional Aga’ipañinadökadö territory was focused on Summit Lake. The traditional Kidütikado territory was predominantly focused around Surprise Valley (in California), Big Valley (in Oregon) and Warner Valley (in Oregon), although areas in Long Valley, especially at the north end of the valley, were used for seasonal activities such as plant gathering and hunting. Deer, antelope, and bighorn sheep were hunted in the hills around Long Valley, while large groups of people would come together for rabbit drives on the valley floor.

Euro-American exploration of the region began in the mid-1800s. John C. Fremont, accompanied by Kit Carson, led an expedition that travelled through nearby High Rock Canyon in 1843. A few years later in 1846, the Applegate brothers, Lindsay and Jesse, together with Leon Scott, would establish the Applegate Emigrant Trail as an alternative route to the Willamette Valley in Oregon. The emigrant trail was used most frequently between 1846 and 1850, during the California gold rush, and then again from 1852 through 1869, after gold was found in Oregon.

Know before you go
Star Gazing Tips
Flora and Fauna

This area is very remote and may be difficult to travel in winter and summer months. Please read the Know Before You Go section of this site to ensure that you and your vehicle are prepared.