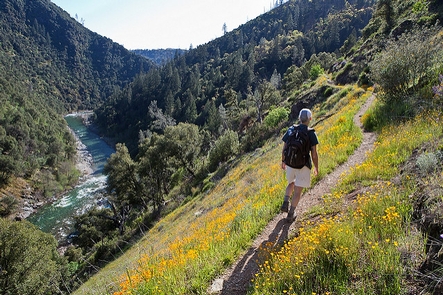 Follow I-80 East towards the town of Colfax and exit at North Canyon Way. Travel along North Canyon Way for about a mile. Go past the Colfax cemetery to the Stevens Trailhead. Parking will be on your left.

Please Note: Due to increased use of the Stevens Trail, on weekends and in the high use season, parking can be an issue. When parking along North Canon Way, be sure to legally park alongside the road safely out of the traffic. Do not block driveways and please respect private property rights. Vehicles parked illegally on private property or blocking any driveway will be towed at the owners expense.

The Stevens Trail is a popular year-round hiking trail in the lower elevations of the Sierra Nevada mountain range. Historically, the trail connected the town of Iowa Hill with the city of Colfax, both in Placer County, California. The current trail extends 4.5 miles along the northwestern slope of the North Fork of the American River Canyon. It begins at the trailhead in Colfax and ends at the confluence of Secret Ravine and the North Fork of the American River.

The story of the Stevens Trail begins with the establishment of the Gold Rush mining communities of Illinoistown and Iowa Hill, separated by the steep North Fork American River canyon. The Stevens Trail was originally surveyed under the ownership and direction of John Rutherford, an Iowa Hill miner and tanner. Rutherford soon brought in a partner, Truman A. Stevens, also a miner. Stevens was responsible for the completion and actual use of the trail during its main years of historic use, 1870-1895.

The trail was originally used as a toll path from Colfax down to Secret Ravine along the American River and then traveled up the other side to Iowa Hill which was a major metropolis during the Gold Rush period. Eventually, the use of the trail died down as did gold fever and it was all but forgotten until 1969 when a Sacramento area Boy Scout was credited with rediscovering the trail. Although the bridge connecting the two sides of the river no longer stands, the trail still provides a beautiful hike through an area that was once bustling with miners...all in search of gold! The Stevens Trail is now listed on the National Register of Historic Places.

NOTE: All California game species are regulated by the California Department of Fish and Wildlife (CDFW).
Rules, regulations, and seasons are controlled by CDFW, and it is the hunter's responsibility to verify and comply with proper species, seasons, zones, regulations, and legal location if hunting on public lands.

FGC 3004 — It is unlawful for any person to hunt or discharge while hunting, any firearm or other deadly weapon within 150 yards of any occupied dwelling house, residence, or other building or any barn or other outbuilding used in connection therewith. The 150 yard area is a "Safety Zone."