Rising abruptly from the desert floor, the Santa Rosa and San Jacinto Mountains National Monument reaches an elevation of 10,834 feet.  Providing a picturesque backdrop to local communities, visitors can enjoy magnificent palm oases, snow-capped mountains, a national scenic trail, and wilderness areas.  Its extensive backcountry can be accessed via trails from both the Coachella Valley and the alpine village of Idyllwild.

Jointly managed by the BLM and the U.S. Forest Service, the Monument’s boundary encompasses about 280,000 acres, including public lands within the BLM’s California Desert Conservation Area and the San Jacinto Ranger District of the San Bernardino National Forest.  The Monument includes two Federal wilderness areas -- the Santa Rosa and the San Jacinto.

The Monument was established by an Act of Congress on October 24, 2000, "in order to preserve the nationally significant biological, cultural, recreational, geological, educational, and scientific values found in the Santa Rosa and San Jacinto Mountains" (Public Law 106-351). Establishment of the Monument reflects the vision of local citizens and national leaders to ensure this special landscape is protected for all time. 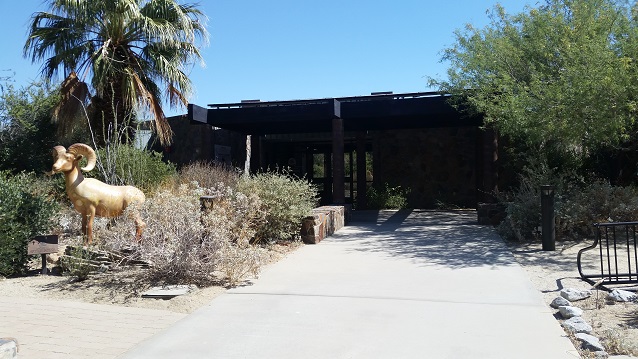 Located on Highway 74 at the National Monument boundary, the Visitor Center is located approximately 4 miles south of the Highway 111 intersection in Palm Desert. Monument staff are available to discuss recreation opportunities, natural resources and other pertinent questions. Interpretive displays, documentary movies, public restrooms, a water fountain, and air conditioning are available for all visitors. Reference books, maps, and other relevant materials are available for purchase.

The Ed Hastey Garden Trail, a 0.2 mile trail, goes around the Visitor Center building. This accessible trail is a great introduction to the common desert plants, reptiles, birds, mammals, and insects that can be seen at the lower elevations of the National Monument. A map and brochure with more information about desert plants is available inside the Visitor Center. Leashed dogs are allowed on this trail.

Agents of Discovery is an opportunity to explore the Ed Hastey Garden Trail as a secret agent. Augmented reality (AR) app provides "Challenges" to follow on a cell phone or tablet for a progressive way of outdoor discovery. Download the free app Agents of Discovery from Google Play or the App Store before arrival to the Visitor Center and begin a leading-edge experience in the Santa Rosa & San Jacinto Mountains National Monument.

The Randall Henderson Trail, a 2.5 mile loop trail, begins/ends in the southern parking lot of the Visitor Center campus. The trail is made of multiple loops, so the trail can also be hiked as a 1.75 mile loop or simply a 1 mile loop. A map and interpretive brochure, that corresponds with 18 numbered posts on the trail, is available inside the Visitor Center. Note: Dogs are prohibited on the Randall Henderson Trail and adjacent un-improved public lands. Along the trail there are also signs that indicate private property boundaries and trail closures. Disregarding any of the posted signs or prohibitions mentioned above may result in law enforcement action against you.

A family campground of 18 first-come, first-served sites with developed facilities (potable water, toilets, fire rings, tables, and parking spaces) is located at Pinyon Flat. The campground is a fee site managed by the Forest Service and is available for $8 per night.

A group campground for equestrian use with developed facilities (two corrals per campsite, tables, fire rings, hitch rack, potable water, toilets, and showers) is also located at Pinyon Flat. The campground is a fee site managed by the Forest Service and is available for $15 per night. Reservations are required and must be made at least 3 days in advance at www.recreation.gov.

Camping is permitted on all BLM lands within the National Monument. Campers may occupy a single site for a maximum of 14 days, and then move to a new location at least 25 miles away. Campsites must be at least 1/4 mile from wildlife water sources, whether natural or manmade. Camping in previously disturbed sites is encouraged. Permits and fees are not required for camping on BLM lands.

Dispersed area camping is permitted on National Forest lands within the National Monument, except where expressly prohibited, including picnic areas, trailheads, and day use areas. Dispersed area camping is generally allowed as long as the user is 1/4 mile from State highways, private property, or campgrounds. Campers may occupy a single site for a maximum of 14 days and then move to a new location. Campsites must be at least 200 feet from a body of water. Vehicles should not be operated off the designated roadway to access a camping spot. When camping within the San Jacinto Wilderness, an overnight permit is required.

At developed sites, fires must be built in the fire ring provided at the campsite.

BLM lands in the National Monument are typically under Stage 1 fire restrictions, therefore campfires are allowed with a valid permit. Seasonal Fire restrictions are implemented by the BLM each year and are posted at www.blm.gov for your review.

The use of fire while camping varies within the San Bernardino National Forest. There are no open fires allowed within the Santa Rosa Wilderness (FS). Fire regulations within the San Jacinto Wilderness change during the year. When fire use is allowed, the camper must hold a valid permit and be within a designated fire ring. Seasonal Fire restrictions are implemented by the USFS each year and are posted at www.fs.usda.gov for your review.

If you have questions regarding fire restrictions and the use of fire while camping, please call the Santa Rosa & San Jacinto Mountains National Monument Visitor Center (760) 862-9984, the San Jacinto Ranger District Office (909) 382-2921, or the Palm Springs-South Coast Field Office (760) 833-7100. 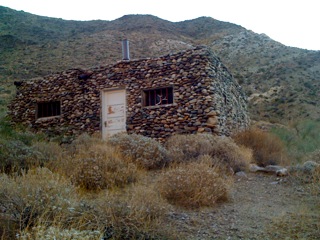 The Santa Rosa Mountains have been the homeland of hundreds of generations of Cahuilla, whose culture has been described and recorded in numerous publications. Direct evidence links the tribe to this area for at least 3,000 years. Within the Santa Rosas are sacred sites, such as the peak of the Santa Rosa Mountain and Tahquitz Peak, and landscape features which are of great importance to Cahuilla history. Within the mountain range, Cahulla villages were generally located in or near the mouth of a canyon or in a valley, and in some instances there were both summer and winter villages with the former being at higher elevations and the latter closer to the valley floor. A network of trails connect village sites, campsites, and other areas of importance. Cahuilla lived in the Santa Rosas until the late 19th century, by which time most Cahuilla had moved to nearby reservations or the Coachella Valley, and contemporary Cahuilla have strong feelings and concern for their ancestral homeland. The Santa Rosas have great heritage value to the Cahuilla and many sites are of National Register quality. The linked document contains descriptions of some of the more significant prehistoric and historic sites in the Santa Rosa Mountains. 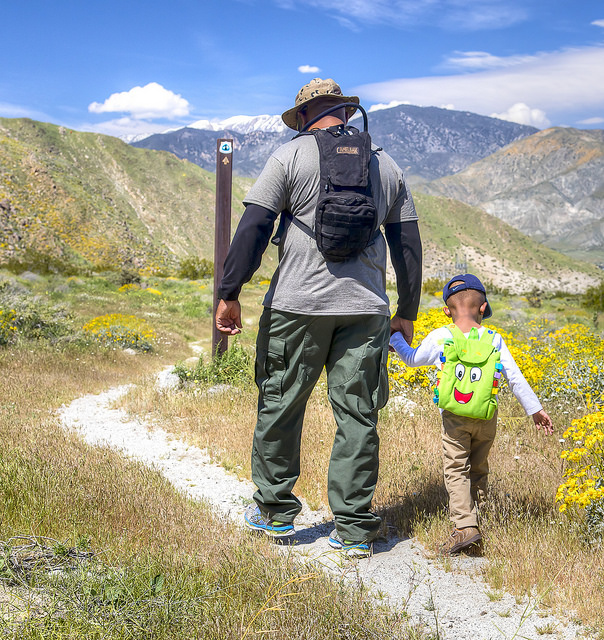 Make it a safe environment for you!

Make it a safe environment for the native flora and fauna!

The linked document provides directions to some popular wildflower viewing sites and lists some of the flower species that are observed there. 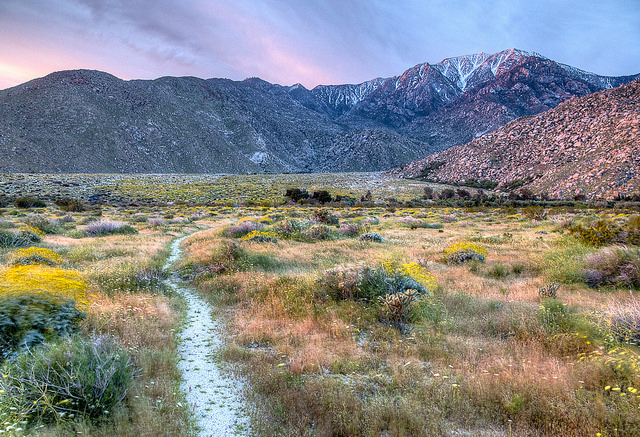 The Coachella Valley, part of the Colorado Desert with elevations ranging from less than mean sea level to several hundred feet, is nestled against the steep slopes of the Santa Rosa and San Jacinto Mountains. The San Andreas Fault itself runs parallel to the mountains on the other side of the Coachella Valley, however there are faults along the base of the San Jacinto and Santa Rosa Mountains which are all part of the San Andreas Fault System.

San Jacinto Mountain is the highest point along the Peninsular Range Province, rising to an elevation of 10,805 feet above mean sea level as the result of fault block activity. Down below in the Coachella Valley, elevations range from below mean sea level to several hundred feet, resulting in an abrupt vertical relief of more than 10,000 feet on the steep eastern face of San Jacinto Mountain, and exceeding the vertical relief in most other parts of the contiguous United States.

The loftiness of the mountain captures significant amounts of rain and snow which makes the Coachella Valley a garden spot in an otherwise dry desert region. As water becomes a more scarce resource with the burgeoning southern California population, it will become critical to maintain the watershed afforded by the San Jacinto and Santa Rosa Mountains. Development and activities which can contaminate the water resources need to be kept to a minimum.

The spectacular vertical relief, the need to protect the watersheds, and the many recreation opportunities afforded by San Jacinto Mountain make it worthy of national recognition.

The Palm Canyon Fault which runs along the base of San Jacinto Mountain is part of the San Andreas Fault System. The faults dam ground water which is then forced up to the surface. In the desert, native fan palm oases (Washingtonia filifera) and cottonwood/willow riparian areas form where there is surface water, providing a critically needed source of food and water for desert wildlife, and delightful places for humans to visit. These areas provide dramatic contrast to the hot, dry desert environment.

The Indian Canyons, located at the base of San Jacinto Mountain and managed by the Agua Caliente Band of Cahuilla Indians, boasts the largest system of native fan palm oases in the United States. Visitors from around the world come to visit these spectacular oases nestled in steep rocky canyons where the force of running water over the millennia have carved the rocks into curvaceous pools and waterfalls. Higher up the canyon walls, the rocks sheen with the beautiful patina of desert varnish.

Associated with some of the springs along the base of the San Jacinto Mountains is hot mineral water, heated at depth probably by emanating gases and hydrothermal activity associated with the San Andreas Fault zone. This hot mineral water is of excellent quality, and is available to visitors at world class spas throughout the Coachella Valley. Conservation and protection of the watershed which recharges these natural springs is important to maintain the high quality of water in the Coachella Valley, and to continue supporting the tourism industry which utilizes this resource.

Starting on January 30, 2023 the Santa Rosa and San Jacinto Mountains National Monument Visitor Center is reopening to five days a week, Thursday through Monday. The visitor center is closed Tuesdays and Wednesdays and hours of operation remain the same from 8:30 a.m. - 4 p.m.

BLM-managed public lands are currently open for dispersed recreation. While there are no plans to restrict dispersed recreation activities in the area at this time, we strongly advise following the current recommendations of public health officials. We will continue to monitor the situation and provide updates as needed. To learn more about the do's and don'ts for dispersed camping please visit: