Lighthouses were built to aid sailors navigate safely. The Piedras Blancas lighthouse was first illuminated on February 15, 1875. The lighthouse was originally 100 feet tall. It housed a first order Fresnel lens that produced a fixed and flashing light that flashed every 15 seconds. In 1916 the lens was modified to produce a double flash every 15 seconds. A fog signal building was constructed in 1905 to produce an audio sound to help guide mariners. The first sound was used in 1906.

Earthquakes over the years had caused damage to the lighthouse. An earthquake on the last day of 1948 resulted in the upper part of the lighthouse being declared structurally unsound. In 1949 the upper three levels (fourth landing, watch room, and lantern) were removed, reducing the height of the tower to about 70 feet. The first order Fresnel lens was loaned to the Cambria Lions Club and moved to Cambria, where it is on display, next to the Cambria Veteran’s Memorial Building.

The Piedras Blancas Light Station is currently managed by the Bureau of Land Management as a historic park and wildlife sanctuary. 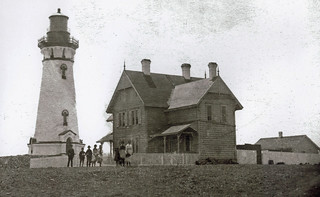