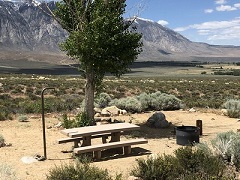 These restrictions will remain in effect until further notice and are in addition to the year-round statewide Fire Prevention Order issued on April 28.

California campfire permits are available free at BLM, U.S. Forest Service and CAL FIRE offices, or at https://www.readyforwildfire.org/prevent-wildfire/. Be advised, some BLM lobbies and public rooms are closed to in-person visits.

Due to extreme wildland fire danger, the annual vehicle closure for Panoche and Tumey Hills recreation areas remains in effect through Nov. 13. Seasonal fire restrictions, which include suspension of recreational target shooting, will remain in effect.

Bakersfield and Bishop Field Offices: Target shooting is generally allowed, if it is done in a safe manner, without damaging natural resources or improvements. Shooting is strictly prohibited in developed recreation sites and other areas where posted.

Hunting is allowed on BLM-managed public lands by individuals with a valid State of California hunting license and who are actively engaged in the legal take or pursuit of game and non-game species in accordance with current California hunting regulations. Hunting on BLM public lands is managed by the California Department of Fish and Wildlife. Please visit https://wildlife.ca.gov/hunting for more information.

Anyone found guilty of violating a fire prevention order may be fined up to $100,000 and/or imprisoned for up to 12 months. Restitution for total fire suppression and damage costs incurred may be borne by the trespasser.