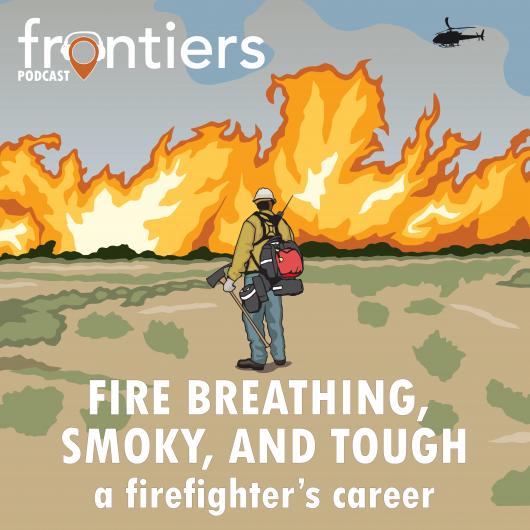 [Jim Hart]: Welcome to the BLM Alaska Frontiers podcast, I'm Jim Hart. There are a few things in life as frightful and inspiring as wildland fires, often fast moving and wind driven, they can release decades of stored solar energy in minutes. As if the heat wasn't bad enough, wildland fires also create a host of toxic gases and fumes, and some fires are so large they create their own weather patterns.

The men and women who stand and fight against these forces of nature are necessarily a tough, fit and well-trained bunch who must be able to carry not only their own weight but the weight of their gear and possibly the weight of an injured colleague. Wildland firefighting is mostly tough, woods working. You're running a chainsaw, throwing brush, or digging in some way. The adrenal side of the job needs to be trained for, but it's not what the job is. Because of the physical demands of the job, the mandatory retirement age for a federal firefighter is 57. No exceptions.

But that doesn't always mean they're out of the fight. Several go on to private companies and continue their work where their experience is put to good use. John Lyons is one of those folks, and he's joined us to talk about his own career with the BLM as a firefighter and give us some insight into what it's like to cut a hand line or mop up a fire with a Pulaski. John, thanks for joining us.

[Jim Hart]: And so the listeners know a handline is a fire line cut by hand, and a Pulaski is a combination between an ax and an adze. And it was named for the man credited with his invention, Ed Pulaski, an assistant ranger with the U.S. Forest Service in 1911. Very effective tool from what I understand.

[John Lyons]: It is it has not been improved upon that I've seen other than an old smokejumper started making one with a longer handle. And that's great when you become an old guy – [when you] don't like bending over.

[Jim Hart]: So, John, you served as a wildland firefighter with the BLM for 30 years, and much of it as a smokejumper. And then you moved into what is called an air attack position? What is a smoke jumper, and how did that lead you into working as the guy who directs aircraft over the fire?

[John Lyons]: Well, a smokejumper is just a firefighter who uses the parachute to go to the fire, quite simply [video of smokejumpers dropping near a fire]. The transition to air attack happened about, oh, five or six years after I left smoke jumping. That was just where I built up my skills. I also did a lot of aircraft work, probably military terms, para-cargo specialists would be loadmaster and a spotter is a jumpmaster, more or less [video of a para-cargo specialist dropping cargo].

[Jim Hart]: So, can you explain what air attack entails?

[John Lyons]: Quite simply, you're trying to keep metal from touching metal. You don't want other aircraft to impact each other, and you also don't want them dropping on the firefighters and injuring someone.

[Jim Hart]: What kind of improvements have you seen over the years?

[John Lyons]: There've been a lot of improvements. Amazingly, though, if you look at a picture of a firefighter in 1988 versus right now on the line, it's hard to see much change. But I would say there is a big improvement in the packs and their ergonomic design, so they aren't as hard on your back.

GPS' just were amazing the effect they had on finding a fire, you know, having aircraft fly over a fire and mark fire saving time going through the woods. That was a big one. We're looking at some aircraft now that can fly much faster and much further and put more retardant on the ground. There have been developments in parachutes and it just kind of chugs along. The engines -- if you were to talk to some engine people and look at the engines in 1988 and the engines now, it's pretty unbelievably different. Boot technology has changed a little bit. but most people are still on the fire line with Polaski in hand and they're wearing leather boots that have been around for over 100 years. It's just based on what works best.

[Jim Hart]: So other than changes in the equipment, the fire seasons have been getting longer, too, haven't they?

[John Lyons]: Yes, that has been a change for sure. People there now, they're talking fire year, not fire season. We're lucky in Alaska. We have a pretty defined end of fire season, but a lot of our firefighters go on the road, go down to the Lower 48, and there's less of a defined end to the fire season in a lot of places. It's definitely changing the profession.

[Jim Hart]: So what are some of your favorite memories as a wildland firefighter?

[John Lyons]: Some of the best memories are being around a campfire after a day of hard work, hard physical work in the woods. And this is definitely an Alaska thing, because you don't go back to a big camp with a caterer. You go back to a campfire and everybody makes their own food and you sit around the fire and you tell stories.

Getting out on the western coast. I had my 100th fire jump. I jumped the beach in Stebbins, Alaska, out on the western coast. You know, we started working on the fire, and then generally smoke jumpers, what they do is they take one of their cargo parachutes and we turn it into a tarp and we put it up. So we had this big 28-foot red and white parachute, and the villagers started coming down, four of them on a four wheeler, whole families on a single four wheeler, and they would come in and drink coffee with us and talk to us. That's just a great memory. Quite a few nights like that to where you're just sharing times in a unique environment.

Definitely when you got to interact with the townspeople like that, that was really great, too. I could go on for hours, though, so I'll cut it off there.

[Jim Hart]: So taking into account everything that you've been through as a wildland firefighter. Would you do it again?

[Jim Hart]: John, thanks so much for joining us. This has been fantastic.

[Jim Hart]: That's it for this Frontier's podcast. Be sure to check out the BLM Alaska website and click on the fire management link. There you'll learn more about the Alaska Fire Service and how to become a wildland firefighter yourself. You'll also find a link to the AlaskaFireInfo.com website where you can get up-to-date fire info from all over the state. The Frontiers podcast is a production of the BLM Alaska Office of Communications.