Podcast: Iditarod, the trail you thought you knew. 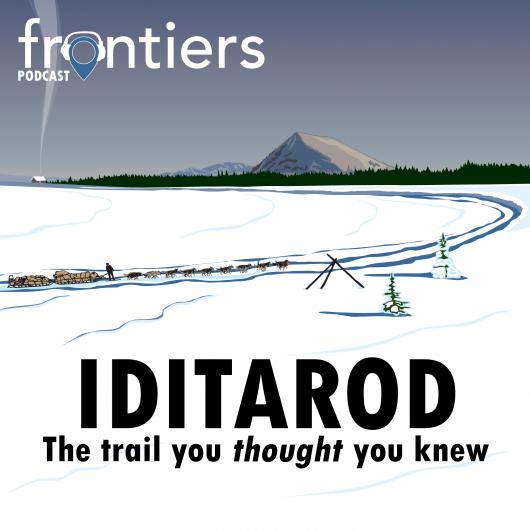 The Iditarod National Historic Trail is possibly the best-known trail in Alaska. It's the only winter trail in the National Trail system and it's the only congressionally designated national historic trail in the state. Perhaps best known for the Iditarod sled dog race, its rich history goes much deeper, and its functionality continues even today.

Kevin Keeler is the Iditarod National Historic Trail administrator. It's noteworthy that only 200 miles of the trail crosses BLM managed public lands, yet the BLM is the sole federal administrator and is responsible for the comprehensive management plan for the entire 2400-mile system. Kevin, thanks for joining us.

[Kevin Keeler]: You bet. Happy to be here.

[Kevin Keeler]: We do it with partnerships. When the trail was first dedicated, it was a partnership that brought it about, between dog mushers who were starting this new race at the time, a daring adventure between Anchorage and Nome and other trail enthusiasts jumped on board and helped out.

The BLM developed with the state of Alaska a comprehensive management plan for the trail, and with the completion of that, adopted the plan and established memorandum of understanding.

More recently, we've developed a friends group for the trail, which helps us get resources on the ground and works with local groups and governments on projects on the trail, named the Iditarod Historic Trail Alliance, and they're very, very important to us for getting work done on the job.

So really, everything's about partnerships to get our work done out there.

[Jim Hart]: And there are some congressional mandates you have to take care of as well, correct?

[Kevin Keeler]: Right. This is one of 19 national historic trails around the country, and Congress identified it as really one of the most unique trail systems in the country of the 19 national historic trails because of its isolated and primitive quality. So we're aiming to maintain that quality while providing an opportunity for people to experience it the way it was experienced 100 years ago.

[Jim Hart]: Why is the trail still important to Alaska?

[Kevin Keeler]: People use it in a lot of different ways, and I think that brings its value. It's used for inter village transportation, people getting back and forth to visit relatives, go to a basketball game, go do some shopping, that sort of thing. It's used to challenge people with a number of competitive events that reflect the diversity of trails we have here in Alaska, and that makes us one of the probably most trail-oriented states in the entire country.

Not only do we have the sled dog race that occurs, but we've got long distance snowmobile racing with Iron Dog and another race that's a long-distance, overland foot and bicycle race that happens every year. So there's a variety of people who follow that and participate in those sports and then people just getting out on the trail itself.

There are a lot of opportunities for people to get out, both in Southcentral Alaska and in the remote parts of the trail, too.

[Jim Hart]: Can you give us some idea of the history of the trail?

[Kevin Keeler]: So, the trail was established to connect the gold rush towns of Flatt and Iditarod. Most of the gold came out of a town called Flat, which is just over the hill from Iditarod. And the Alaska Road Commission extended trails that were leading between Seward and Nome down to the Iditarod Goldfields, as that district was called. At that point, lots of materials and supplies needed to come in and out. It was, for a while, the third largest population center in Alaska, with almost twenty thousand people living in that neck of the woods. And the gold needed to come out, supplies needed to go in, and mail needed to go in and out, and dog teams were used for a lot of that over these trails that were established that today we call the Iditarod.

[Jim Hart]: How easy is it for people to access some of the historic sites along the trail?

[Kevin Keeler]: I like to break up the regions for the Iditarod into the road-accessible sections that are between Seward and Fairbanks and then west of the road belt over from Knik to Nome. And there's lots of stuff along the road system here, both in terms of trail sections on the Kenai Peninsula, in Chugach State Park there are some outstanding sections of the trail over Crow Pass that had been described by the early explorers as a miniature Yosemite with its 5000 foot peaks lining the valley there.

Then the more remote sections are accessible pretty much only by snowmobile or by bush aircraft in the wintertime, because it is a winter trail, after all, and much of the country that the cover of the trail crosses turns to wetlands in the summertime, making it impassable.

[Jim Hart]: And it's important to note the cabins on the trail are out there for safety purposes, but people can use them, correct?

[Kevin Keeler]: Right. One of the interesting things that happens during these events that occur on the Iditarod trail is that with that expanded safety net out there, some people like to travel a trail for recreation. So I've run into people who've been biking the length of the trail, snowmobiling the length of the trail, staying in the cabins along the way. And they're not exclusive use cabins that you can rent out like a public use cabin. Places like Prince William Sound or the White Mountains. They are open to one and all, basically to allow people that safety and the shelter from the elements that you confront in interior Alaska.

[Jim Hart]: Well, Kevin, sounds like you're awfully busy. Thanks for joining us.

[Kevin Keeler]: You bet. There's a lot of work, but it's also a real privilege to be involved with it.

[Jim Hart]: That's it for this Frontier's podcast. Make sure to check out the story titled Finding Safety and Shelter along the Iditarod Trail. In that article, you'll find the history of the cabins, as well as links to an interactive map and a story map featuring entries from a 100 year old diary from a pioneer who traveled 350 miles of the trail on foot.

The Frontiers podcast is a production of the BLM Alaska Office of Communications.