On February 12, the staff from the Bureau of Land Management’s (BLM) Lake Havasu Field Office helped decontaminate watercraft at the WON BASS Arizona Open at Lake Havasu tournament. The BLM completed decontaminations with the Arizona Game and Fish Department (AZGFD) and Woods to Water Wildlife Solutions to stop the spread of aquatic invasive species (AIS) and protect western waters.

Lake Havasu is known to be infested with quagga mussels, and unsuspecting boaters can harbor these mussels in a microscopic state called veligers in engine lines or live wells. These mussels which were first discovered in Lake Mead in 2008 have been traveling down the Colorado River infesting dams and invading native vegetation and fish habitat. The BLM and AZGFD aim to educate boaters about the risks involved with AIS and how to prevent the spread with decontaminations and the CLEAN, DRAIN, and DRY campaign.

The WON BASS tournament was held for three days from February 10 through February 12, with 175 participants in the competition. Over three days, the contestants caught up to an allotted limit each day, and at the end of the competition, the angler with highest combined weight of fish caught was the winner. Despite the scenic desert views and cooler weather, it was a real challenge for the anglers and hard-fought competition.

At the end of the competition, anglers had the option to get their boat decontaminated by the AZGFD and BLM. Boats were decontaminated using very hot water at key points on the boat such as the live well, the hull, and the engine. Boaters appreciated the watercraft decontamination and attachment of a boat cleaning seal to their vessel. Otherwise, many who traveled from outside Arizona would have spent more time at a highway check station, which would have meant a longer drive home. 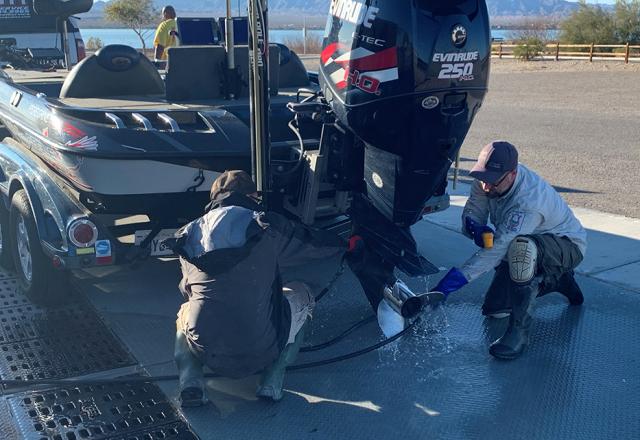 For California boaters, call 928-412-5965, the Lake Havasu Field Office offers decontaminations at the Rock House Recreation Area on the Parker Strip. In Arizona, you can contact the Arizona Game and Fish Department for a decontamination. Call 623-236-7608 or visit https://azgfdais.simplybook.me/v2/

For more information about stopping the spread of aquatic invasive species, visit https://stopaquatichitchhikers.org/