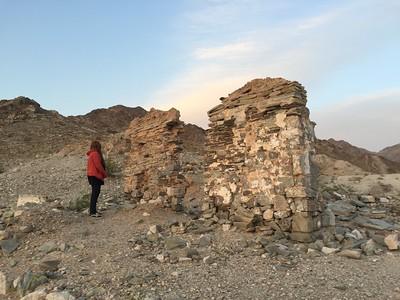 Tumco is an abandoned gold mining town and is also one of the earliest gold mining areas in California. It has a history spanning some 300 years, with several periods of boom and bust. Originally named Hedges, the town was completely abandoned in 1905, victim to speculative over-expansion and increasing debt. Renamed Tumco in 1910 -- after The United Mines Company -- another attempt to go after the gold proved just as costly.

By 1911, the diminishing prospects of the mines forced the miners and their families to return to Yuma, signaling the end of Hedges/Tumco as a community. Gold was first discovered by Spanish colonists as they moved northward from Sonora, Mexico. According to legend, two young boys came into their camp one evening with their shirts filled with gold ore. These muchachos cargados (loaded boys) were the namesake for the Cargo Muchacho Mountains, where the Tumco deposits occur. Following the first discovery of gold, numerous small mines were operated by Mexican settlers for many years. 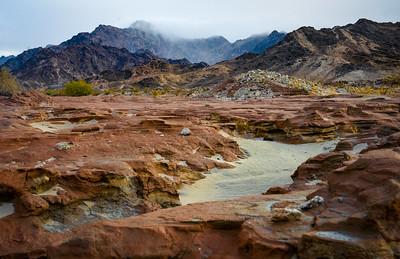 In 1877, the Southern Pacific Railroad completed the Yuma to Los Angeles line of its transcontinental route. With the presence of the mountains, a gold rush into the area began. This initial rush to stake mining claims soon gave way to mining companies that moved into the area, purchased claims and developed the mines on a large scale. A 12 mile wood pipeline pumped over 100,000 gallons of water from the Colorado River per day, and the railroad carried mine timbers from northern Arizona for use in the expansive underground workings. Ultimately, over 200,000 ounces of gold was taken from the mines in the area. Tumco was a typical mining town of its day.

Historical accounts talk of rich eastern investors, unscrupulous charlatans and colorful characters in the raucous townsite and the mining boom ultimately leading to financial ruin. Although little can be seen of Tumco, during the boom time of the 1890's, it supported a population of at least 500 people and the 40 and 100 stamp mills of the mine produced $1,000 per day in gold.