The Snake River used to flow across the northern portion of the Snake River Plain, but now flows along the southern margin of the Plain. The river was pushed there by successive lava flows. Sixty six thousand acres are within a Wilderness Study Area (WSA). The northwest end of the lava flow has been designated as a National Natural Landmark by the US Park Service. Today, three trails go across this desolate landscape, one primitive and the other two developed with interpretive signs. Even though this area looks uninhabited, it is growing and alive with wildlife and vegetation.

The Lava Trails traverse the desert of the Snake River Plain through contorted landscapes created from multiple lava flows. These Hawaiian-type lava flows are associated with the stretching of the earth’s crust. Hell’s Half Acre lava flow erupted about 4,100 years ago and is 222 square miles or 162,000 acres. The lava flowed at 2,000 degrees Fahrenheit, had the consistency of molasses, and traveled at speeds up to 30 mph.

Lava rock is extremely sharp, glassy and fragmented, with open cracks, lava tubes and caves. A'a (ah-ah) and pahoehoe (pa-hoy-hoy) lava flows are the most prevalent here. Areas of soil and vegetation not covered by lava are called kipuka, a Hawaiian word meaning 'window in the lava.'

The Lava Trail system is open to non-motorized recreation activities only. 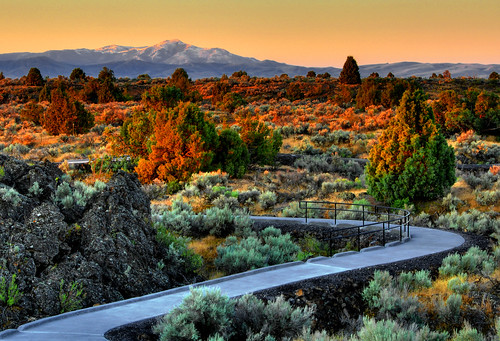