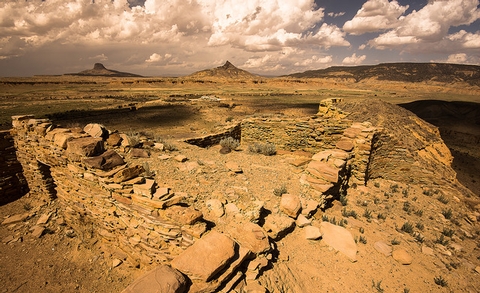 -At 21.5 miles, stay left (although it looks like the main road is to the right, it is not. However, if you wish to camp, this is the road to take to the top of Mesa Chivato).

-At about 29 miles, there is a deep low water crossing that may become impassible during and after rainstorms.

-At 29.5 miles, the parking lot and access trail to the Ruin is on the left.

-The parking area is best entered from the second entrance.

-Guadalupe Ruin is accessed by a steep, unimproved footpath.

Guadalupe Ruin, the easternmost Chacoan Outlier, is a single-story masonry pueblo situated on an isolated sandstone mesa rising nearly 200 feet above the valley floor. The top of the mesa is isolated by sheer walls on all sides, with access to the top restricted to a narrow trail. This mesatop location provides an impressive view of dissected canyons, rugged mesas, and volcanic necks along the Rio Puerco Valley. The ruin consists of at least 39 rectangular rooms and 7 semi-subterranean kivas, two of which are stabilized and roofed for public access. Archeological investigations conducted in the 1970s suggest that the site was originally built as a Chacoan Outlier, but was reoccupied in the late 13th century by immigrants from the Mesa Verde area, who remodeled many of the rooms and built a new kiva in their own architectural style.

Curiously, most Chaco Outliers are located north, west, and south of Chaco Canyon, while Guadalupe stands out nearly alone in its eastern placement in the Chacoan World and may have been positioned to take advantage and possibly control of a migration and trade route between the San Juan Basin and the Rio Grande, where seven of New Mexico's 19 modern Pueblos are located.

Chaco Background
The sites of the Chacoans are among the best known archaeological sites in the American Southwest. Between A.D. 700 and 1150, the Chaco Culture flourished, with Chaco Canyon serving as the social and religious center of the Northern Southwest. During the 900s and 1000s, a series of "Chacoan Outliers,"structures similar to those in Chaco Canyon, was constructed in western New Mexico, southwest Colorado, eastern Arizona and southeast Utah. Many outliers were connected to Chaco Canyon or other outliers through a network of prehistoric roads. The outliers and connecting roads offer a view to an ancient landscape of astonishing scale and complexity. The Chacoan region as defined by the distribution of outliers and Chaco Canyon itself was recognized internationally though placement on the UNESCO World Heritage list.