The Bisti/De-Na-Zin Wilderness is a rolling landscape of badlands which offers some of the most unusual scenery found in the Four Corners Region. Time and natural elements have etched a fantasy world of strange rock formations made of interbedded sandstone, shale, mudstone, coal, and silt. The weathering of the sandstone forms hoodoos - weathered rock in the form of pinnacles, spires, cap rocks, and other unusual forms. Fossils occur in this sedimentary landform. Translated from the Navajo language, Bisti (Bis-tie) means "a large area of shale hills." De-Na-Zin (Deh-nah-zin) takes its name from the Navajo words for "cranes."

Map of the Bisti/De-Na-Zin Wilderness 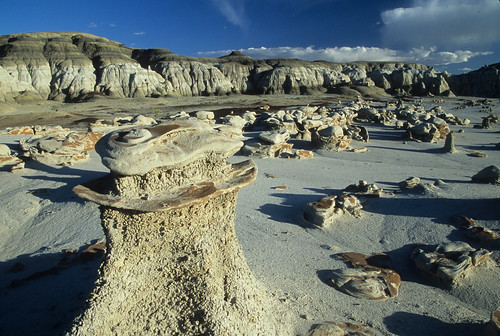