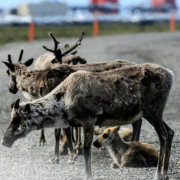 The decision allows for construction of up to three drill sites and associated processing and support facilities, including gravel roads and pipelines to provide access to federal leases and allow for responsible oil and gas development and operations. This decision also adopts modifications to the project that reduce impacts based on input from tribal governments, cooperating agencies and various other stakeholders received during scoping and the public comment period for the Draft EIS, including modifications analyzed in the Supplement to the Draft EIS released for public comment in March.

“President Trump made his administration focus on American energy independence and the freedom it provides from day one of his term,” said Secretary of the Interior David Bernhardt. “This decision will make a significant contribution to keeping oil flowing down the 800-mile Trans Alaska Pipeline decades into the future while delivering federal and state revenue as well as important impact assistance to the affected native communities.”

“This decision strikes an appropriate regulatory balance,” said BLM Alaska State Director Chad Padgett.  “The project is an important job creator for families in Alaska, with more than 1,000 jobs expected during peak construction and more than 400 jobs during operations, creating more revenue for the State, and offering protections for important resource values such as caribou and subsistence activities.”

Today’s announcement includes deferring a decision on portions of the proposal. The deferral, which includes drill sites BT4 and BT5 and associated gravel roads and pipelines, was requested by ConocoPhillips Alaska Inc. to conduct additional outreach to affected communities about these components of the development plan. The deferral does not alter the current proposal.

The project required collaboration with seven federal agencies and numerous State of Alaska agencies, as well as the North Slope Borough, Native Village of Nuiqsut, City of Nuiqsut, and the Inupiat Community of the Arctic Slope.