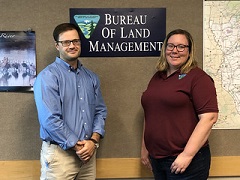 “Since starting my new assignment in January, I have really enjoyed working with our community partners, who along with our dedicated, hard-working staff, work well together as a team on a wide variety of issues,” says Meyer-Shields. “We have a wealth of natural resources in the Mother Lode and collectively we can leverage resources to accomplish projects on a broader, landscape-scale than we could ever achieve individually.”

Meyer-Shields started her federal career as a Presidential Management Fellow in the planning and environmental coordination program at the BLM’s Washington Office. She has been the BLM California state planning and environmental coordinator and previously served as both the acting associate Mother Lode field manager, then acting Mother Lode field manager after William Haigh retired in late 2018.  Meyer-Shields has a law degree from the University of Denver and an environmental science degree from Oregon State University.

Sjostrom joins the BLM from the Eldorado National Forest, Placerville Ranger District where he worked as  a natural resources officer.

“I believe partnerships are vital to managing sustainable, working public lands,” says Sjostrom. “I look forward to fulfilling the multiple-use mission of the BLM by engaging partners to ensure our efforts reflect the interests of the communities we serve.”

Sjostrom began his federal career as a forestry technician at the White Mountain National Forest in New Hampshire, where he grew up.  He has also worked as a wildland firefighter on the Klamath National Forest and is dedicated to wildland fire safety and forest health. Sjostrom has political science degree with a minor in business administration from the University of Maine.

The Mother Lode Field Office manages roughly 230,000 acres of public lands stretching across 14 counties in the central Sierra Nevada foothills from Nevada County in the north to Mariposa County to the south. Areas of interest include the Cosumnes River Preserve; the North Fork American, Merced, and Tuolumne Wild and Scenic Rivers; the Pine Hill Preserve and the Red Hills Area of Critical Environmental Concern, as well as highly visited recreation areas along the South Fork American, South Yuba, and Mokelumne rivers. Major programs within the office include recreation, minerals, realty, botany, wildlife, fuels and forestry.