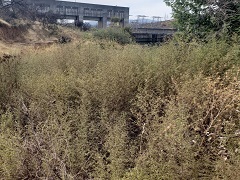 REDDING, Calif. – Northern California natural resource managers are asking for the public’s help in a battle against an invasive, non-native plant with a name that hints at its damaging and unpleasant impacts: stinkwort.

Known to botanists as Dittrichia graveolens, the tarry-smelling plant can harm livestock, displace wildlife by crowding out native vegetation and cause itchy contact dermatitis in people. Thought to have originally arrived in northern California in 2005, the plant is rapidly spreading in disturbed areas such as roadsides, pastures, fields, burn scars, gravel yards, and areas near water. It thrives in northern California’s hot, dry summers.

Stinkwort is a shrubby-looking plant that grows up to three feet high and has small yellow flowers. It has an oily texture and unpleasant tarweed smell.

BLM-managed public land,” said Laura Brodhead, an ecologist with the Bureau of Land Management Redding Field Office. “People can also pull, cut, mow or chemically treat the plants on their own properties. It’s critical to remove the plants before they can go to seed and spread.”

Brodhead said the plant is native to Europe, but is spreading worldwide as seeds are dispersed by wind, water, fur, clothing, vehicles and other means. Resource agencies classify the plant as a noxious weed because it aggressively spreads, damaging agricultural plants, animals and human health.

Brodhead encourages anyone interested to learn more about the plant and ways to eradicate it by doing their own research or by contacting her at the BLM in Redding, 530-224-2176.