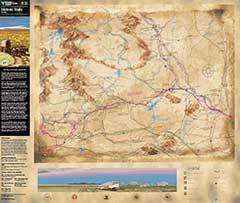 During the 1800s, Wyoming became the focus for American expansion into the trans-Mississippi west. Robert Stuart’s discovery of South Pass in October 1812 gave hope that a practical overland route to the Pacific (the route Lewis and Clark searched for but failed to find) did exist.

Some 150,000 pioneers went west between the years of 1849 and 1852. By the mid-1850s, stage coaches and freight wagons were regular users of the California, Mormon Pioneer and Oregon trails, rolling both east and west through South Pass. For 19 months in 1860-61, the riders of the Pony Express transcontinental mail service thundered through the pass on an incredible schedule covering 2,000 miles from St. Joseph, Missouri, to San Francisco, California.

Download the map to view the National Historic Trail cooridors in Wyoming and learn more about the sites along the way!