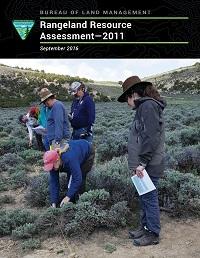 The 2011 BLM RRA is a product of a partnership among the BLM, the United States Department of Agriculture–Natural Resources Conservation Service (NRCS), and the Center for Survey Statistics and Methodology (CSSM) at Iowa State University. The 2011 BLM RRA augments the National Resources Inventory (NRI) RRA, conducted by the NRCS, which estimates the status and condition of rangeland resources and describes trends on nonfederal rangelands. The NRCS conducts the NRI RRA in cooperation with the CSSM, which generates the statistics and survey design methods used in the NRI. The NRCS has conducted on-the-ground NRI sampling on nonfederal rangelands since 2003.

The BLM, NRCS, and CSSM developed this partnership to use funds and the existing workforce efficiently to provide a unified estimate of rangeland status and condition on nonfederal rangelands and BLM-managed public rangelands. The 2011 BLM RRA and the 2011 NRI used the same sampling design and the same trained data collectors. Field methods used in the 2011 BLM RRA were used also in the 2011 NRI. The CSSM provided statistical support for the selection of samples, support for the survey design, and statistical processing and estimates of the attributes and indicators for the 2011 BLM RRA (Nusser et al. 2013).