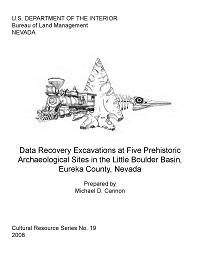 On behalf of Barrick Goldstrike Mines, SWCA Environmental Consultants implemented a data recovery mitigation plan for five prehistoric archaeological sites: 26EU1533, 26EU1539, 26EU1548, 26EU2064, and 26EU2126. These are the National Register of Historic Places–eligible sites identified within the area of potential effects associated with activities included in the Plan of Operations for the Goldstrike mine, which was submitted to the Elko Field Office of the Bureau of Land Management (now the Tuscarora Field Office of the Elko District) in January 2007. This document reports the results of the data recovery project, which was conducted pursuant to a Historic Properties Treatment Plan (Cannon and Stettler 2007) accepted by the Elko Field Office of the Bureau of Land Management, with concurrence from the Nevada State Historic Preservation Office, in July 2007.

The five sites investigated during the project were determined eligible for the National Register of Historic Places under Criterion D due to their potential to provide information relevant to a variety of research issues. The project focused on collecting data applicable to topics outlined in a research design prepared for the project area in 1991 (Schroedl 1991a) that were both appropriate for the sites involved in the project and of high priority given the current status of archaeological research in the area. Although a variety of specific research questions are addressed in this report, those that were of primary importance in the research design for the project can be grouped into two broad areas: 1) identifying deposits that date to discrete time periods and that can thus provide information about change over time, and 2) documenting and understanding site structure. The project also produced new information about issues such as site formation processes, subsistence, mobility, technological organization, and use of the Tosawihi Quarries chert source. The data recovery process that was implemented to address these issues involved both traditional archaeological methods, such as surface artifact collection and excavation, and cutting-edge remote sensing survey.

The geophysical remote sensing techniques of magnetometry, conductivity survey, and magnetic susceptibility survey were used at all five sites in an effort to locate subsurface archaeological features with the highest potential for providing data applicable to important research questions, particularly thermal features and occupation surfaces that date to relatively discrete time intervals. The types of features that were targeted were not identified in the remote sensing data—primarily because, as manual excavations and mechanical stripping conducted at the end of fieldwork revealed, such features were largely absent from the sites investigated. Thus, the sites investigated could not provide the test case for the use of geophysical methods that was hoped for going into the project. However, the geophysical work conducted during the project did lead to methodological insights that should improve the efficiency and effectiveness of future archaeological remote sensing surveys in the region. In particular, this project makes it clear that more work needs to be done to understand the cause of the "false positives"—apparently the result of geological phenomena—that limited the utility of geophysical methods for archaeological prospection during the project. Steps taken to identify the cause of these false positives during this project included limited auger probing at two sites, which produced inconclusive results, and comparison of geophysical data to the distribution of wildfire-burned vegetation, which does not appear to be responsible for false positives. Recommendations for future archaeo-geophysical work in the region include pursuing more robust test cases, experimentation with altering survey parameters such as traverse interval and instrument height and orientation, integration with further geoarchaeological research designed to determine what geological factors are reflected in remote sensing data, and use of a "multi-scalar" approach to geophysical survey.

Following completion of remote sensing surveys, a phased approach to excavation was implemented. An initial exploratory phase was intended to locate buried features and obtain chronological information, and when features or areas that appeared to date to discrete time periods were identified in this way, block excavation areas were to be opened in order to collect additional data applicable to project research questions. Results of the exploratory phase of excavation warranted more extensive block excavation at only one site, 26EU2126. The block excavations that were conducted at this site led to the identification of two archaeological features and the recovery of large samples of datable materials, lithic artifacts, and faunal remains, which comprise perhaps the most significant data recovered during the course of the project. As a final step in fieldwork, the surface sediments were mechanically stripped from each site in order to locate any archaeological features that were not encountered during manual excavation and to allow a more thorough evaluation of remote sensing data; an additional feature was identified at 26EU2126 as a result of doing this.

Materials collected during fieldwork underwent a variety of laboratory analyses in order to complete the process of addressing project research questions. These analyses include radiocarbon dating of charcoal and bone samples, X-ray fluorescence and hydration analysis of obsidian artifacts, and studies of faunal remains, macrobotanical remains from flotation samples, ground stone artifacts, and chipped stone tools and debitage.

Occupations at the investigated sites date to a range of chronological phases that span the late Holocene (approximately 4,500 14C yrs B.P. to present). Despite the project's focus on identifying deposits that date to discrete periods of time, few sites or site loci could be dated to individual phases due to insufficient datable materials and/or palimpsest deposits. An exception to this occurred with one of the areas of 26EU2126 that was explored by block excavation, which produced faunal specimens radiocarbon-dated to the period between A.D. 1230 and 1300, as well as multiple temporally diagnostic projectile points and obsidian hydration measurements that are generally consistent with this age. Geoarchaeological observations made during the course of the project suggest that palimpsest deposits may be the rule in the project area rather than the exception due to low rates of deposition and a lack of clear depositional hiatuses during the last few thousand years.

Faunal remains recovered from 26EU2126 are primarily from artiodactyls, which is consistent with a region-wide pattern of high artiodactyl relative abundance in late Holocene archaeofaunal assemblages. These remains include at least one elk specimen, which represents the first archaeofaunal record of this taxon in the project area. The faunal remains and associated materials are consistent with a logistical settlement pattern in that they suggest an isolated resource processing event. Flotation samples were recovered from four sites (26EU1539, 26EU1548, 26EU2064, and 26EU2126), primarily from charcoal lenses that appear to be the remains of wildfire-burned vegetation and that were investigated in order to develop methods for distinguishing archaeological from non-archaeological lenses. Features that appear based on other evidence to be archaeological contained no plant remains that are clearly the result of human subsistence activities, but this is not surprising given that one is associated with large mammal processing and the other appears to have been the result of hearth cleaning, rather than an actual hearth itself. A limited sample of ground stone artifacts collected during the project, which are primarily expedient in design, suggests that the investigated sites were occupied only periodically by highly mobile individuals and that those individuals did not rely on plant foods as much as on animal foods. Taken together, subsistence data from the project are consistent with a pattern documented previously for the region, in which foraging efficiency was high, and diet breadth narrow, during much of the late Holocene, with a decline in foraging efficiency and corresponding expansion of diet breadth evident after about A.D. 1300.

Lithic data from the project conform with the long-known fact that chert from the Tosawihi Quarries heavily dominates assemblages in the area. A very small amount of obsidian accounts for the remainder of the lithic material recovered during the project. Obsidian sourcing analysis indicates that four sources, located at distances ranging from 110 to 400 km away, are represented at the investigated sites. A pattern of differential source representation between tools and debitage suggests that tools made from obsidian from more distant sources were curated and brought into the LBBA, while material from closer sources was more likely to be used in tool manufacture that actually occurred in the LBBA.

Bifacial reduction appears to have been the dominant strategy used to process Tosawihi chert at the investigated sites, but some evidence of expedient tools and core reduction was also observed. The heavy reliance on bifacial technology suggests that site occupants were highly mobile and required an efficient means of transporting toolstone. Analysis of debitage and tool assemblage composition provides some evidence for functional variability among sites and site loci, though all assemblages appear to be associated primarily with late-stage tool manufacturing, tool rejuvenation, and resource processing activities. Unfortunately, due to limited chronological information from individual site loci, it is not possible to determine whether intra-site spatial variability in debitage assemblages is associated with temporally distinct occupations or whether it reflects functional variability within individual occupations. Overall, however, the lithic data suggest that the individual sites investigated during the project were either short-term camps used by highly mobile foragers or extractive locations that played a role in a larger logistically organized settlement system.