Moving toward the recovery of the Amargosa Vole 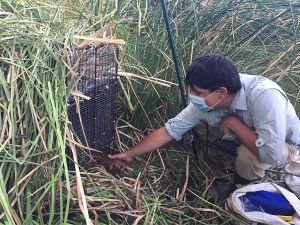 In the hottest and driest parts of the Mojave Desert lives the endangered Amargosa vole, a small mouse-like rodent with short ears and a short tail. This rare species only lives in small patches of habitat, about 75 acres spread across 55 patches of bulrush marsh along the Amargosa River near Tecopa, California. Near Tecopa, the Amargosa River rises above ground and creates a green oasis for the vole and other rare plants and animals found nowhere else on earth. The Amargosa vole was thought to be extinct in the early 1900s but was rediscovered in the late 1970s.

In 2012, the Amargosa vole’s future looked bleak. The world population for the species was hovering around 50–75 individuals. The Borehole Marsh, the voles’ main habitat, was in catastrophic decline, and researchers estimated there was an 82% chance of extinction in the next five years without immediate management intervention.

With this charismatic critter on the knife edge of extinction, the Bureau of Land Management’s Barstow Field Office, with support from the Desert Management Group, formed the ad hoc Amargosa Vole Recovery Team in 2013. The team is comprised of private landowners along with federal, state, non-profit, and academic institutions, including the U.S. Fish and Wildlife Service, U.S. Geological Survey, California Department of Fish and Wildlife, Amargosa Conservancy, UC Davis, UC Berkley, Purdue University, and Inyo County Road Department, with the common goal of saving the vole and recovering its populations. 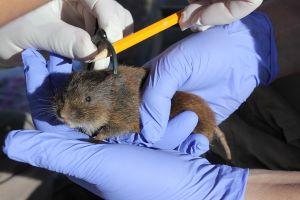 Water is a key issue for maintaining healthy vole habitat. To better understand how the “plumbing” works, the BLM invested in a multi-year effort with the U.S. Geological Survey to determine the source of the water that supports the vole habitat. Researchers discovered that a relatively small portion of the water comes from the precipitation that falls within the Amargosa Rivers watershed, but most of the water is supplied through a complex underground carbonate aquifer that extends across state lines into Nevada. The aquifer is ancient and chemical analyses indicate the water may have been underground for more than 20,000 years and traveled hundreds of miles before it resurfaced through a series of artesian springs along the river’s edge.

With hard work by a village of dedicated partners and individuals, efforts are paying huge dividends. The Amargosa vole’s numbers are increasing, and its habitat is becoming more stable. In 2020, the Amargosa Vole Team was recognized by the U.S. Fish and Wildlife Service with the Recovery Champion Award for staff and partners whose work is advancing the recovery of endangered and threatened species. 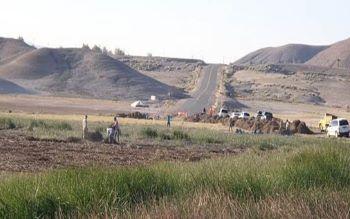 “The team’s work is an excellent example of how federal and state agencies, academic institutions, non-governmental organizations, and private partners can work together to conserve endangered species,” wrote Martha Maciel, Acting Deputy Regional Director for the U.S. Fish and Wildlife Service in her congratulatory email. “Your exceptional work is helping to create the roadmap for long-term survival and recovery of this species.” The voles have a long road ahead and still face threats from habitat loss and challenges around water security for their marsh habitat. Based on current climate change projections, the Mojave Desert will continue to face hotter and drier conditions with more severe periods of prolonged drought. The long-term survival of this species and its habitat remains in question, so building resilience into the surviving population is paramount.

The BLM’s Barstow Field Office, with its partners, is focusing on future projects which will build upon the foundation established to this point. These projects include establishing water rights to maintain groundwater for the vole’s habitat, completing range-wide surveys to determine current population estimates, planning for the development of a large marsh complex adjacent to Borehole Marsh, as well as continued management of vole habitat. The Amargosa Vole Recovery Team remains hopeful that their hard work and combined efforts will continue to move this rare and important species toward recovery.