Students from the West Contra Costa School District’s K-12 Virtual Learning Academy in California seek help locating their missing weather balloon with its data that likely landed near the Bureau of Land Management’s Grand Staircase-Escalante National Monument in Utah. A beacon was found nearby this month. The balloon launched March 18, 2022, from the Hercules Middle School, in Hercules, Calif. 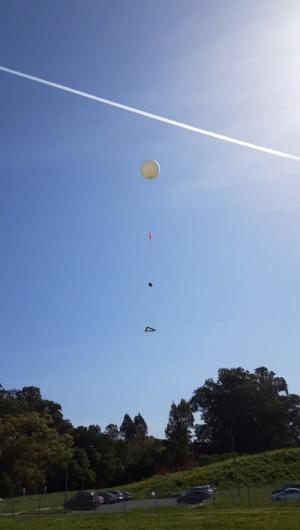 During the launch from California’s Bay Area, students observed a slow ascent due to a miscalculation of the helium amount needed for the launch.

“When it was all said and done, [the balloon] landed in Utah in the Grand Staircase-Escalante National Monument,” said Thomas, who enlisted the help of local Bureau of Land Management Park Rangers to help locate the lost weather balloon and its data.

According to Thomas, students were collecting data that included pressure, altitude, temperature, velocity, and video footage to discuss photosynthetic activity afterwards (introducing the students to the Normalized Difference Vegetation Index or NDVI), a tool used at the university level to help scientists observe vegetation density and plant health.

BLM rangers recovered the GPS tracking beacon on March 24, at approximately 9 p.m., about 8.6 miles west of the Smoky Mountain Overlook in the vicinity of Nipple Bench Road on the Monument, but the balloon, camera, scientific instruments, and its data have yet to be recovered.

“This data will allow us to continue with our lesson on the atmosphere and recover possible high-altitude data across two states from an amateur weather balloon, which is not a common feat,” said Thomas.

It is believed the missing scientific equipment and balloon are likely somewhere close to where the GPS tracking beacon was recovered. If found, the public is asked to reach out to the Monument at BLM_UT_ES_Interagency@blm.gov.