Following guidance from the CDC and recommendations from state and local public health authorities, the BLM is temporarily restricting in-person public access to visitor centers and public rooms in our Wyoming offices.  Please check with individual offices regarding customer services available by phone or email. Click here to learn more. 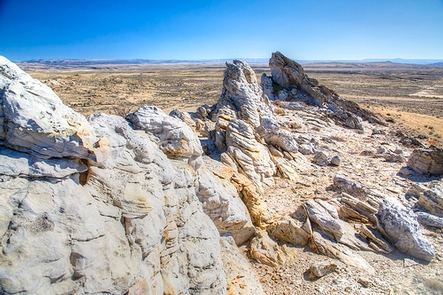 There are several ways to view the trail. Three highways traverse the segment's corridor. Highway 220 follows the corridor from Independence Rock to Muddy Gap Junction, Highway 287 follows it from Muddy Gap to Sweetwater Station, and Highway 28 parallels the segment from its crossing of South Pass to its end at Farson. In some places these highways cross the actual trails or closely follow them.

Four National Historic Trails (NHTs), the Oregon, Mormon Pioneer, California, and Pony Express, share the same corridor through central Wyoming known as the South Pass region. This portion of the trail corridor has special significance because it contains many miles of well-preserved trail and numerous nationally recognized sites. In addition, the landscape surrounding this segment looks virtually the same as it did 150 years ago when the first emigrants passed through the area.

Important historical sites along the trail include Independence Rock, Devil's Gate, Split Rock, Ice Slough, Rocky Ridge, Willie's Handcart Disaster Site, South Pass and Parting of the Ways. In addition to the above, there are numerous state stops, telegraph stations, military posts and river crossings that played an important role in the history of the trails. Highway turnouts near many of the sites contain interpretive markers and provide excellent vantage points from which to view the trail corridor and the surrounding countryside.

While much of the NHT corridor in Wyoming is undisturbed, some portions have been improved and are now two-track or graded roads. Other portions have been obliterated by highway construction. However, visible trail remnants can be seen from Independence Rock to Farson, Wyoming.

BLM WYOMING KNOW BEFORE YOU GO