On June 18, 2022, national, state office, and local leaders of the Department of the Interior Bureau of Land Management (BLM) and the U.S. Department of Agriculture (USDA) Forest Service joined with members of the Bears Ears Commission to solidify an inter-governmental agreement covering the cooperative management of the Federal lands and resources of the Bears Ears National Monument. Even before the agreement signing ceremony began, spirits were bright.

Each leader had an opportunity to share why the agreement was valued and beneficial to their respective groups, the struggles they faced along the journey, and what this agreement represents for present and future generations. Multiple speakers exclaimed, “This is a good day.” The ceremony concluded when Tribal Nations whose representatives comprise the Bears Ears Commission, BLM Director, and USDA Under Secretary for Natural Resources and Environment signed the Inter-Governmental Cooperative Agreement. This event was very successful in providing an opportunity to celebrate and acknowledge Indigenous partnerships and contributions associated with Bears Ears National Monument.

After signing the formally recognized agreement, the gathering traveled along Highway 261 where representatives of the five Tribes on Bears Ears Commission and BLM and USFS leaders jointly unveiled the new signage for Bears Ears National Monument. The sign includes emblems of the Hopi Tribe, Navajo Nation, Ute Mountain Ute Tribe, Ute Indian Tribe of the Uintah and Ouray Reservation, and the Pueblo of Zuni. The unveiling was accompanied with cheering, chanting, clapping, and smiling faces. Many embraced photo opportunities beneath the sturdy twelve-foot sign and celebrated the physical marker on the ground that denotes the monument boundaries. 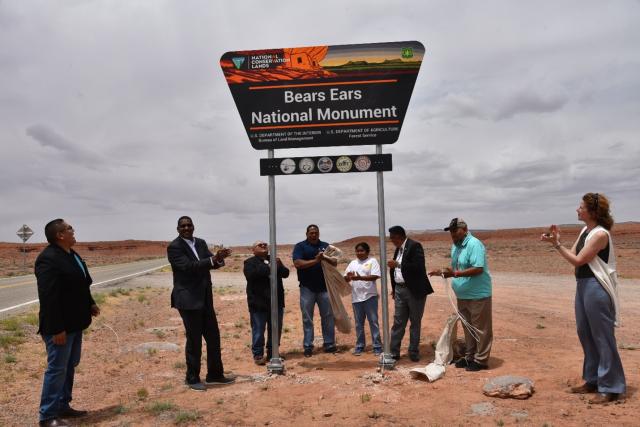 With over 13,000 years of human occupation recorded, the Bears Ears region is rich in culturally and historically unique sites. This is a living landscape, and Indigenous Tribes still utilize this area for traditional and ceremonial uses. The five Tribes of the Bears Ears Commission have been caretakers of this area for centuries. The agreement solidifies the understanding that Indigenous relationships with the land bring forth a crucial perspective for how to better manage Bears Ears National Monument. Bears Ears Commission Co-Chair and Lieutenant Governor of Zuni Pueblo Carleton Bowekaty shared the following statement, “Today, instead of being removed from a landscape to make way for a public park, we are being invited back to our ancestral homelands to help repair them and plan for a resilient future. We are being asked to apply our traditional knowledge to both the natural and human-caused ecological challenges, drought, erosion, visitation, etc.,”

Learn more about the monument on the Bears Ears National Monument website.