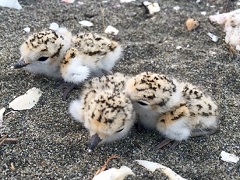 For nearly two decades, Bureau of Land Management staff in Arcata have been grooming beach habitat to encourage nesting by western snowy plovers, small shorebirds that are listed as a threatened species. For much of that time, BLM staffers were disappointed when the birds ignored the new nesting areas.

That all began to change in 2016, when increasing numbers of fluffy, spotted plover chicks began appearing on the restored habitat beaches of the Mike Thompson Wildlife Area, South Spit, Humboldt Bay. The staffers were thrilled at the end of this year’s recording setting nesting season when 37 chicks fledged on BLM’s South Spit habitat.

“A line from the movie Field of Dreams says, ‘if you build it, they will come,’ and we are happy to be realizing that spirit of optimism,” said Molly Brown, manager of the BLM Arcata Field Office. “The South Spit fledglings represented more than 50 percent of the chicks fledged during the 2019 breeding season in a snowy plover recovery area that includes beaches in Del Norte, Humboldt and Mendocino counties. A total of 58 chicks fledged in the entire recovery area, up from 48 a year ago.”

The BLM Arcata Field Office manages 51 acres of breeding habitat for western snowy plovers that prefer to lay their eggs on wide-open expanses of beaches, where they can easily see and ward off predators. To improve nesting habitat, BLM crews work outside of breeding season using heavy equipment such as bulldozers and agricultural tractors with discs to remove invasive European beach grass and add oyster shells to the beach surface.

Download a photo of the snowy plover chicks in the sand. (BLM Photo)