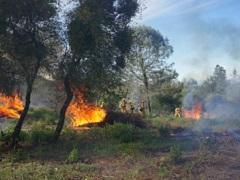 EL DORADO HILLS, Calif. — The Bureau of Land Management (BLM) Mother Lode Field Office will oversee a controlled prescribed burn of roughly 200 piles to begin as soon as next week on approximately 20 acres in the Cameron Park Unit of the Pine Hill Preserve in El Dorado County. Burn operations may continue periodically through the spring depending on weather, air quality and resource availability. Smoke may be visible in Cameron Park, El Dorado Hills, Shingle Springs and along U.S. Highway 50.

“Prescribed fire is an important tool that can be used to reduce the risk of large and severe wildland fires, increase public and firefighter safety, as well as renew the natural ecosystem of the rare plants and wildlife habitat at the Preserve,” says BLM Mother Lode Field Manager Elizabeth Meyer-Shields. “The BLM appreciates the public’s caution when recreating near the prescribed fire, as we undertake this important work.”

The controlled burn will be conducted in cooperation with CalFire. Public lands managed by the BLM Mother Lode Field Office will remain open during burning, but the public should avoid areas where there are active operations. Emergency and fire suppression equipment will be onsite.

Prescribed fire is regularly used at the Pine Hill Preserve and is part of a multi-year, phased approach to vegetation management that also includes manual cutting, chipping and mechanical brush removal, as well as maintaining and expanding fuel breaks where appropriate. The goal of prescribed fire is to reduce hazardous fuels and minimize wildland fire danger.

The Pine Hill Preserve encompasses nearly 5,000 acres of unique geology and special soil known as gabbro soil, which was formed 175 million years ago when magma cooled slowly. Roughly 10 percent of California’s native plants are found at the Preserve, which is home to nearly 750 different types of plants, including eight rare species, five of which are federally listed and found nowhere else in the world.

Updates on prescribed burns for this area will be provided by BLM through its social media accounts on Facebook and Twitter. For more information on the prescribed fire, please call the Mother Lode Field Office at 916-941-3101 or email the office at BLM_CA_Web_ML@blm.gov.