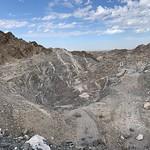 EL CENTRO, Calif. -  The Bureau of Land Management is seeking public comments on mineral exploration for gold within the Picacho Area of Critical Environmental Concern (ACEC) at the Oro Cruz Pit Area, in the Cargo Muchacho Mountains, Imperial County. The Project would result in minor surface disturbance and measures would be taken to prevent unnecessary or undue degradation during project operations.

The proposed project by SMP Gold Corp. includes constructing permanent and temporary access roads, making existing road improvements, creating helicopter landing pads, installing drill pads, and creating a staging area. The surface disturbance on BLM-managed land from the proposed exploration activities is approximately 20 acres. The project would be completed within a two-year period, which includes the reclamation at each drill site.

Most of the proposed drilling locations will occur within areas that have been previously disturbed by a mining project that concluded in 1996 with reclamation completed in 1999. The Picacho ACEC encompasses 183,970 acres of BLM-managed public land and contains important cultural resources and historic properties, including the Tumco historic gold mining district. The Picacho ACEC also serves as a critical habitat for the desert tortoise and a movement corridor for wildlife species, including bighorn sheep and mule deer.

The BLM will host a virtual public informational meeting via Zoom on Wednesday, Nov. 30 from 4-5 p.m. PST. Please register in advance at: https://bit.ly/3V05jj2. The informational meeting will provide details on the project and the National Environmental Policy Act process. Written or oral comments made during the meeting will not be considered as formal public comment.

Public input on the proposed project is due by Dec. 16. Public comments may be submitted through ePlanning at: https://bit.ly/3Ej3tEd; by fax at 760-337-4490, Attn: Mayra Martinez; by mail to Bureau of Land Management, Attn: Mayra Martinez, 1661 S 4th St., El Centro, CA 92243; or by email to: mymartinez@blm.gov. Please add “Oro Cruz Exploration Project” in the email subject line.

Environmental documents, maps and other information is on the Oro Cruz Exploration Project ePlanning website: https://bit.ly/3Ej3tEd.