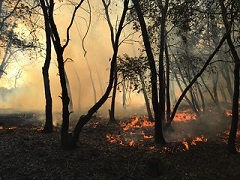 REDDING, Calif. – The Bureau of Land Management is planning prescribed burning projects for the fall and winter months on public lands in Shasta, Butte, Tehama and Trinity counties.  Crews will ignite the pile burns and broadcast burns only when weather and fuel conditions allow for safe and successful burning and smoke dispersion.

“All of these projects are part of our commitment to sustaining public lands important to our communities,” said BLM Redding Field Manager Jennifer Mata.  “We are committed to keeping public lands healthy, productive and accessible.”

An 81-acre project in the Weaverville Community Forest is scheduled for this fall. Crews will use a broadcast burn to remove small branches and brush left over from forest thinning projects.  The carefully managed, low-intensity fire will reduce wildfire danger and improve forest health.

The BLM and Trinity County Resource Conservation District manage Trinity County forest in a partnership to maintain open recreational space and to provide forest products including lumber and firewood.

Also in Trinity County, crews plan to complete the Big Creek prescribed fire at Ewing Reservoir near the community of Hayfork.  The fire will improve oak woodland wildlife habitat and expand existing fuel breaks that help provide wildfire protection for the community.

The Butte Thin prescribed fire project in Butte County could begin during the week of Oct. 8, or when weather conditions are favorable.  The project will include a 110-acre understory burn north of DeSalba within a 131-acre forest thinning project completed several years ago.  Crews will also continue pile burning in the same area.

The projects are designed to reduce wildfire risk to the communities and watershed by creating shaded fuel breaks along Garland and Doe Mill roads.

The BLM also plans burning projects in the Upper Ridge Nature Preserve near the community of Magalia in Butte County, where crews will implement five-acres of pile burning. The burns will clean up woody debris from the Camp Fire.

In Tehama County, BLM crews plan to burn slash piles along Ponderosa Way in the Campbellville area.  The piles were created during earlier forest thinning projects.

Crews will also work on pile burning projects to reduce hazardous fuels along recreational trail corridors in Shasta County.  Project areas include the Chappie-Shasta OHV Area north of French Gulch, the Sacramento River Rail Trail, Swasey Recreation Area and other areas of public lands in the communities west and north of Redding.  Workers will remove fire and storm-damaged vegetation and woody debris along the trails and make burn piles of brush and small trees removed during the work.

Smoke may be visible from nearby communities during the projects.

Additional information is available from the BLM Redding Field Office at 530-224-2100.

Download a photo of a prescribed burn in Butte County. (Laura Brodhead/BLM)