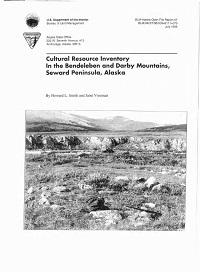 This report documents archaeological inventory conducted by the Bureau of Land Management's Kobuk District on the Seward Penninsula in 1991. The inventory was conducted in a large contiguous block of BLM Land comprising parts of the Fish River tmd Tubutulik River  drainages, and was part of an on-going program of base-line inventory for cultural resources. A total of 13 sites was recorded as a result of the inventory, representing prehistoric, historic, and recent periods. Most sites apparently dated to prehistoric times and typically consisted of one or more stone features such as caches or tent rings. These sites most likely represent late prehistoric hunting camps or possibly infrequently used campsites associated with travel from the coast to the interior of the peninsula.