Latitude/Longitude:
35.49846417, -106.8414356
Directions:
Traveling northwest toward Cuba on US 550 from Bernalillo, the drive is approximately 20 miles. Before San Ysidro (about two miles), turn left onto Cabezon Road (County Road 906) at the intersection of Cabezon Road and US 550. Follow the left fork. Travel 4.4 miles to the gravel parking lot.

Tucked away in rugged and scenic country southwest of the community of San Ysidro, New Mexico, is the White Ridge Bike Trails Area. Just to the west is the newly designated Ojito Wilderness. Both sites are a short distance from U.S. 550. This region is known for its geological, cultural and paleontological resources, as well as for its scenic qualities. The bike trail crosses a landscape of spectacular beauty and exceptional geology, meandering through the Pueblo of Zia, State of New Mexico, and public land managed by the Bureau of Land Management (BLM). BLM has obtained rights-of-way from the Pueblo and the State to provide this biking experience. Although the Trails have been developed primarily for mountain biking, hikers are welcome on the entire trail system, and one segment is also open to equestrian use.

White Ridge is named for the color of the gypsum that forms much of the mesa and the majority of the bike trails. Gypsum is a white mineral consisting of hydrated calcium sulfate and is commonly used in cement, plaster and fertilizer. This gypsum formed as a chemical reaction from evaporation of an ancient water body. In other words, the Ojito area was once covered with water! At the western edge of White Ridge, the Tierra Amarilla Anticline forms high, narrow mesa ridges. This classic example of a plunging anticline is visited by several university field schools each year.

Fossil remains of rare dinosaurs, plants, and trees from the Jurassic period are located in the Morrison Formation. Natural erosion processes have exposed the bones of huge dinosaurs and large segments of petrified trees. These fossils are approximately 150 million years old! The longest dinosaur ever recovered, Seismosaurus, was discovered only a few miles west of the bike trails area in what is now the Ojito Wilderness. Paleontologists and geologists use this great variety of life to construct geologic timelines and interpret climate changes over the earth's history. Please leave these objects in place. 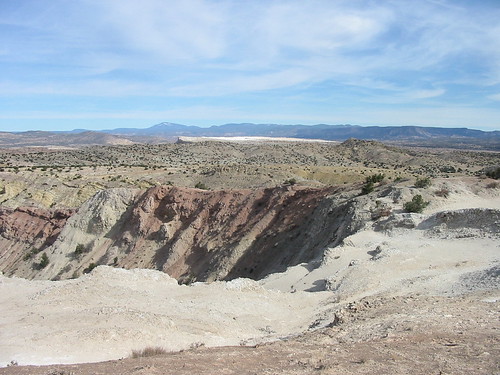