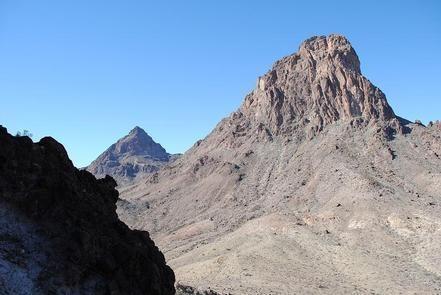 The Turtle Mountains Wilderness area ranges from broad bajadas to highly eroded volcanic peaks, spires, and cliffs. The Mopah Range contains the two signature Mopah Peaks, which are rhyodactic or volcanic plugs. The northern most peak is a landmark known as Mexican Hat. The area has numerous springs and seeps. Much of the Turtle Mountain range has been designated as a National Natural Landmark in recognition of its exceptional natural values.

Dominate vegetation consists of the creosote bush-bur sage and the palo verde-cactus shrub ecosystems. In the washes, Colorado/Sonoran microphylla woodlands can be found. These woodlands include such things as palo verde, smoke tree, honey mesquite, and catclaw. Wildlife species include bighorn sheep, coyote, black-tailed jackrabbits, ground squirrels, kangaroo rats, quail, roadrunners, golden eagles, prairie falcons, rattlesnakes, and several species of lizards. The desert tortoise is found within the wilderness area, and northwestern and northeastern portions of the wilderness area are considered critical habitat. The wilderness is located in the southern portion of the sector and consists of 177,209 acres. OHV activity is common along the boundaries of wilderness.